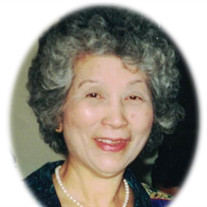 YUT “ONG” YEE June 27, 1925 – December 26, 2019 Beloved wife of the late Tong Yee; Loving mother of Edmund (Eileen) Yee, Edgar (Pat) Yee, and Lila Yee (Lance) Allward; Proud grandmother of Alyson(Paul Fagerstromz)Yee, Ben (Margaret Shumbarger) Yee, and Rachel (Andrew) Bowman, Lindsay (Ben) Allward-Theimer, Adrien Allward; and great-grandmother of Ewen Fagerstrom. Ong (she never liked being called Yut) was born June 27, 1925 in Baltimore, MD. Similar to Tong, she was the last surviving sibling of her generation, the 5th of 6 children. Her parents, Mong Har Lee and Kim Chui (Lim), immigrated to the US from a village near Canton, China. Although Ong was born in Baltimore, at age 5, her father sent the family back to China in 1930 due to the Great Depression while he remained working in the US. Shortly after arriving back in China, her mother died. Ong was first raised by her teen twin sisters, then when they married, Ong moved in with her father’s stepmother in Canton (Guangzhou). And as she tells it, was treated harshly. When she was about 10 years old, her married sister pulled her out of school to move in as a babysitter. In 1938, when Japan attacked China, it was only through the benevolent intervention of Uncle Leroy (her father’s 1st cousin) that persuaded her father to allow Ong to return to the US. Ong was 13 years old when she boarded a Russian ship with her brother SK for a one-month voyage back to the US. They initially arrived in Seattle, WA and took a train to Buffalo, NY where they lived for a short time before moving to Washington, DC. During WW2, Ong blossomed into a beautiful young woman in her 20’s and often danced the night away with young soldiers as a USO volunteer. Her “Cinderella” story took another happy turn when Uncle Leroy intervened once again and set up a blind date on Dec. 26, 1947 for Ong to meet his friend, Tong Yee from New York. Tong had his own impressive story as a 14 year old immigrant, diligently working his way out of poverty to graduating from college as a Chemical Engineer. They fell in love during their long-distance dating and married the following year in 1948. Ong joined Tong in West Haven, CT where they raised three children – Edmund, Edgar, and Lila. They moved to St. Clair Shores, MI, in 1967 with Tong’s new job at UniRoyal Tire. While neither Ong, nor Tong, were raised in a stable family household, together they certainly created one. Ong loved and tended to Tong after a hard day of work, and adeptly managed the household where living frugally meant simple luxuries were appreciated. She instilled Christian values in her children by “talking the talk and walking the walk”. In other words, she made a house our “home” based on strong family values and integrity, and Sunday mornings at church a given. Ong and Tong enjoyed their twilight years by doting on their 5 grandchildren. Whether near or far, they would drop their plans to “babysit”.” Ong was loyal, devoted, generous to family and friends, and loved playing mah jong whenever possible. Her creativity included “exercise” by shopping every day, finding the best deals, handmade gifts via crochet/knit/sew. She remained avid penpals, spanning decades, with her brother HK and 5th grade buddy, Norma. After Tong passed away in 2013, Ong still enjoyed a good dance and could always be found singing joyfully. Now she’s with her man once again. Viewing at O'Brien/Sullivan Funeral Home, 41555 Grand River Avenue, Novi, 248-348-1800 on Saturday, January 4, 2020 from 11:00 AM - 1:00 PM and prayer at 12:30 PM. Donations may be made to: Daniela Serenity Care,178 Leon Road, Walled Lake, MI 48390 or Open Arms Hospice, 39500 W. Ten Mile Road Novi, MI 48375.

The family of Yut “Ong” Yee created this Life Tributes page to make it easy to share your memories.

Send flowers to the Yee family.