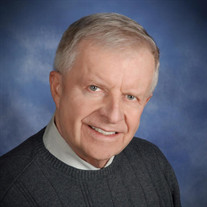 Bill Zienert One Life Lived... May Lives Changed Aug 17, 1942 - May 20, 2020 William A (Bill) Zienert, 77, of Novi, Michigan died May 20, 2020, at Ascension Providence Park Hospital, Novi, MI, two days after suffering a major stroke at home in the first hour of May 18th. He was born on August 17, 1942 in Detroit, MI. The first son of the late Arnold W and Doris Elizabeth (Johnson) Zienert. Bill is survived by his loving wife of 55 years, Kathy; their two children, Karen, of Niles, MI, & Rick, of Dearborn, MI; and grandchildren Megan (22), Jenna (19), Jason (15) & Hannah (11) of Belleville, MI. He was proceeded in death by infant daughter, Angela. Angela’s remains were re-interred beside her father in Forest Hill Cemetery, Ann Arbor, on July 20, 2020. Bill is also survived by his only brother, Rob, and Rob’s wife, Brenda, of Matthews, NC. Kathy’s sisters and their husbands also mourn the loss of Bill: MaryAnn & Joseph Marion of Levittown, PA and Bette & Paul Schregel of Newtown Square, PA. Gene Neeld, Kathy’s sister-in-law, widow of Kathy’s brother, Frank, of Riegelsville, PA, also mourns his passing. He leaves behind a number of nephews, nieces, grandnephews & grandnieces and great grandnephews & great grandnieces. He is also survived by 8 dear cousins. We’re especially grateful for cousin Karen (Johnson) Tome, Kathy’s best high school friend, who introduced Bill & Kathy on a blind date on August 7, 1964. Bill took great joy in mentoring new and growing Believers. Friends from Bill & Kathy’s 47 years in Ann Arbor, across the USA and in 10 to 12 other nations miss his presence and digital communication. Before Bill & Kathy moved to Novi in September, 2016, they prayerfully searched for a new church home in the area. They were led to Berean Baptist of Livonia where they were warmly welcomed by many new friends. Bill quickly developed relationships with a group of Berean men who meet weekly for breakfast & fellowship. In 1965 Bill earned his Bachelor of Mechanical Engineering degree from General Motors Institute. He had been sponsored by the Ternstedt Division of General Motors and continued to work for the Ternstedt Plant at Fort & Livernois in Detroit until March of 1968 when he hired into Ford Motor Company at their fairly new Plastics Processing Plant in Saline. A few years later, Bill was the engineer charged with the responsibility of purchasing all of the plastic injection molding and blow molding equipment for the newest Plastics Processing Plant being constructed in Milan. About that time, Kathy took charge of the couples personal finances when it became evident that Bill wasn’t concerned about tiny little things like a checking account that was $1.43 off balance. When the Milan Plant was completed, Bill was promoted as an Engineering Supervisor there. At some point in the late ‘70’s or early ‘80’s Ford moved Bill to more central offices in Dearborn where he finished his 31 year career with Ford. He worked in about 4 different office building locations in Dearborn (not all at once), as Manager of Manufacturing Feasibility for Plastic Products. It was a high stress job, often requiring him to explain to persons much higher up in the organization why they could not make the design they were intent on building. At least once this conversation was with the President of Ford Motor Company. For this reason, along with the fact that Bill’s division was about to be spun off as the independent company, Visteon, Bill took an early retirement from Ford at age 57 in September, 1999. It took him several months to catch up on his sleep, stop dreaming about work, and decide what he wanted to do with the rest of his life. Bill decided to invest his life in studying the bible and forming relationships with people. He became a bible scholar and a mentor to scores of people. He & Kathy continued to enjoy travel, something they had done throughout their marriage. Before Parkinson’s Disease began to take a toll on Bill, he had become quite a skilled woodworker. That hobby began in the late ‘80’s when Packard Road Baptist Church in Ann Arbor (now renamed Crossroads Community Baptist Church) had a major building expansion and Bill was a member of the Building Committee. Bookcases & benches which he built for that church are still in use today. Kathy is glad that she has a beautiful natural cherry table and cabinet in her apartment which she watched him make for her. Bill’s family & friends will gather Saturday, August 15, 2020 at 11:00 am, Berean Baptist Church, 38303 8 Mile Road, Livonia, MI 48152 for a Celebration of Life remembrance. Those who are unable to attend may look on YouTube for: Bill Zienert: One Life Lived...Many Lives Changed. Memorial Contributions may be made to Berean Baptist Church, Parkinson’s Foundation of Michigan or Fox Run Philanthropy, Resident Care Fund.

The family of William "Bill" Zienert created this Life Tributes page to make it easy to share your memories.

Send flowers to the Zienert family.