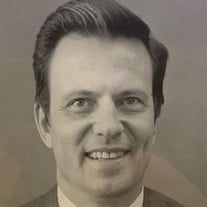 On Wednesday April 3, 2019, William (Bill) Walter Bowman III, loving father and grandfather, passed away at the age of 92. Bill was born on September 26, 1926 in Topeka, KS to William Walter Bowman II and Ethel Hawk. Bill served in the U.S. Marine Corps from 1945 until 1947 then earned a B.A. Degree at William Jewel College in 1952 where he was recognized as an outstanding athlete in multiple sports ultimately being inducted into the WJC Athletic Hall of Fame. Bill came to Detroit for a part time summer job selling vacant residential lots leading to his start in the real estate business with Thompson Brown in 1954. Throughout his career he oversaw the development of more than 10,000 residential housing units and 12 industrial and business parks including the development of the 250-acre Farmington Freeway Industrial Park which became the first Class-A certified industrial park in the Michigan Commerce Department Certified Industrial Park Program in 1970. In the late 1970’s Bill helped bring Providence Hospital to Novi, handling their first land acquisition at 10 mile and Haggerty and then ultimately the assemblage of their campus at Grand River and Beck Road where Ascension Providence is today. In 1980 he assembled and rezoned the property for Trammel Crowe for the development of the Novi Town Center. Bill also lead the development of the OST zoning ordinance following his success with the 12 Mile Corridor development in Farmington Hills which paved the way for the Haggerty-M5 Corridor major corporate development in Novi. Bill was a member of the Detroit Real Estate Association and the National Association of Realtors. He was licensed as a builder in the State of Michigan and a member for the Builders Association of Southeastern Michigan, the Michigan Home Builders Association, and the National Association of Home Builders. Bill became a member of the National Association of Real Estate Appraisers as a Certified Real Estate Appraiser in 1971. Bill served in several capacities on many government, industry and civic organizations throughout his career. Bill had been a member of SIOR (Society of Industrial and Office Realtors) for more than 50 years. On the 40th anniversary of his membership he received the SIOR Ameritus Award which rewards and acknowledges his longstanding service and contributions to industry. Bill is survived by his children from his marriage of 38 years to Barbara (Ballard); William Walter IV (Bill Jr) (and his wife Kris), Robert Vern (Bob) (and his wife Kathy), Blair Mathew (and his wife Kimberle) and Brenda Elizabeth (Marrone) (and her husband Steve) Loving Grandfather to Brittany, Maclain (Mac), James, Christopher, Matthew, Kelsey, Blair Jr, McKenzie, Grant, Parker, Anthony and Nick and great grandchildren Aidan and Reagan Bill had a real zest for life displayed by his canvas river boat trip down the Missouri to the Mississippi all the way to the Gulf of Mexico in his early teens and shown throughout his storied business career, all along the way keeping up his incredible work ethic until the very end. Bill had an incredible impact on many people’s lives and will be loved and missed by all who had the pleasure of meeting and working with him. Visitation at the O’Brien/Sullivan Funeral Home, 41555 Grand River Avenue, Novi, 248-348-1800 on Tuesday, April 9, 2019 from 2:00 PM – 8:00 PM. Instate Wednesday, April 10, 2019 at Suburban Collection Showplace Diamond Center, 46100 Grand River Avenue, Novi from 10:00 AM until time of funeral service 11:00 AM. Luncheon immediately following the funeral service. Memorial contributions to the Fisher House Michigan Click here to contribute or Ascension Providence Foundation, benefiting the Hospice Program support fund.

On Wednesday April 3, 2019, William (Bill) Walter Bowman III, loving father and grandfather, passed away at the age of 92. Bill was born on September 26, 1926 in Topeka, KS to William Walter Bowman II and Ethel Hawk. Bill served in the U.S.... View Obituary & Service Information

The family of William Walter Bowman III created this Life Tributes page to make it easy to share your memories.

Send flowers to the Bowman family.