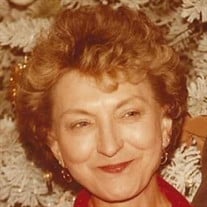 Violet (Droshine) May 24,1929 – November 3, 2020. Beloved wife to Frederic Leigh Wyckoff for 69 years, loving mother to Bruce (Gloria) Wyckoff, Gary (April) Wyckoff, Valerie (Jim) Nelson and Laura (Mark) Johnston. Violet was born in Detroit, and lived on the East Side in a Russian enclave that was one of several immigrant neighborhoods at that time. The activities revolved around the Russian Orthodox Church and the small family bakery her parents ran. Violet attended Pershing High School and graduated in 1947. Violet was accepted at Michigan State University, where she received a degree in Art in 1951. To help pay her college tuition, Violet worked on the SS South America, which was a cruise ship that ran on the Great Lakes during and shortly after the Second World War. It was there that she met her future husband Fred. Violet and Fred were later married on June 21, 1951, just prior to Fred being deployed as an Ensign in the U.S. Navy during the Korean War. After three years in California and three years in Ann Arbor, while Fred was in Law school, they bought a house in Garden City, Michigan and proceeded to raise four children together. Violet was a wife, mother and house keeper for over forty years. Upon Fred’s retirement, they split their time between Farmington Hills, Michigan and Green Valley, Arizona. They enjoyed spending time with their four grandchildren Garret, Matthew, Rachel and Claesen. Violet loved finding beauty in the world and enjoyed art, travel, flowers, fashion, and architecture. She had an artist's eye and could make something beautiful from anything. She had a warm outgoing personality and was very quick to laugh. She was also an avid fan of Michigan State University athletics. In lieu of flowers, memorial donations can be made to Angela Hospice www.angelahospice.org and the Detroit Institute of Arts. https://www.dia.org/support/donate A funeral service will be held privately due to the COVID-19 virus.

The family of Violet Wyckoff created this Life Tributes page to make it easy to share your memories.

Send flowers to the Wyckoff family.