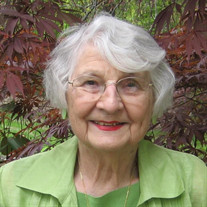 Verna Janet Bartoletti Verna Janet Bartoletti “best mom ever,” died March 4, 2021, just shy of her 100th birthday. Born June 28, 1921, in Paterson, NJ, she grew up during the Great Depression. Her father was a police officer, so always had a job, but she remembered him being paid in “scrip,” good only at the local grocery store and gas station. Verna graduated from NJ State Teachers College in May 1942 and, after a brief teaching career, enlisted in the Women’s Auxiliary Army Corps. Following basic training, she was called to Active Duty in 1943 as a Lieutenant, stationed at Dale Mabry Field in Tallahassee, FL. A chance encounter at the Officers’ Club introduced her to Captain Geno Bartoletti, the man she would marry and love until his death in 1997. After their February 1946 wedding, the newlyweds moved in with Geno’s mother in Detroit. She grew up in the Tuscany region in Italy, so in her house, Italian was spoken more often than English. Verna didn’t speak Italian, but she fit in just fine, and helped Geno’s younger brother, Ermo, with his high school homework. In 1949, the couple bought a brick bungalow on the east side of Detroit and, thanks to Geno’s second job, in 1956 were able to build a summer cottage on Loon Lake in Irons, MI. A few years later, they built two more log cabins to create Tuscany Point Resort. What followed were summers filled with annual renters, who became friends and provided playmates for the kids. While Verna ran the Resort at the lake, Geno worked in Detroit and drove up north and helped on weekends. Vern did the books, cleaned the cabins, and took the garbage to the dump! It was work, but in between, she and the kids enjoyed long and wonderful summers. Once a week, they went into town to the library, the laundromat, and the grocery store, where everyone picked out a very special treat--a TV dinner! They always brought home armloads of library books, which Vern stayed up reading late into the night. As a young child, she taught herself to read before she went to school and continued to love books and reading her whole life. Her parents, Joe & Tillie, retired to their own small cottage at Loon Lake and her sister Joan and family came to visit every summer. This happy tradition continued with Joan and husband Bill long into their retirement years. Before the kids were born, Verna worked at the telephone company in Detroit. Despite working at many other things, that was her only paying job until she and Geno retired up north and she served as the Lake County Assessor. One part of the job required going on site to measure a home’s exterior to determine its assessed value. This often meant tramping through the woods or down muddy trails. But Vern had plenty of experience in outdoor work! Over the years, she raked seaweed from the lake, drove a trailer (forward only!), hauled tarps full of leaves to the leaf pile, and carried bundles of sticks to the stick pile. After Geno died, she split her time between the lake and her Novi condo, driving back and forth each year until her late eighties. She enjoyed living in Novi, being much closer to her children, grandchildren, and great grandchildren. And as a life-long Presbyterian, she was pleased to join Faith Community Presbyterian Church. But she always looked forward to going up to the lake. Verna said she had a wonderful life and never felt as old as she really was. She will be missed by her children Ricki (Marcello) Veneziano, Valerie (Jim) Kushman, and Mark (Ellen) Bartoletti, and by her sister Joan Paisley. She was a much-loved Nonni to Giorgio (Mary) Veneziano and their children Silvia and Sabrina Veneziano, and to Lara (Steven) Stakich and their children Nikola and Nina Stakich. She also will be missed by other family members, and friends who were like family. Over her life, she also was the best-ever cat mom to seven cats. Verna will be buried next to Geno at Lake View Cemetery near Loon Lake. Memorial contributions may be made to Michigan Animal Rescue League (MARL), 790 Featherstone, Pontiac, MI 48342, or Faith Community Presbyterian Church, 44400 W. Ten Mile Rd., Novi, MI 48375. A memorial service will be held at a later time.

The family of Verna Janet Bartoletti created this Life Tributes page to make it easy to share your memories.

Send flowers to the Bartoletti family.