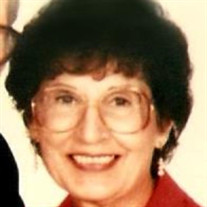 Vera Rose Zuzich was born on April 18, 1924 in Detroit. She was the second child of first-generation Croatian immigrants. Though shy and sheltered as a child, she was also competitive and determined. She excelled at school from the start and was the salutatorian for her high school class. In spite of the prevailing view that college was not for women, she studied chemistry at Wayne State University and graduated Cum Laude. During a sorority hayride she met John William Kerastas, whom she married in 1948. Vera worked as a chemist for Gelatin Products and Difco Laboratories until she became pregnant with the first of her 3 children. Though allegedly a strict mother, her children’s success and character are testaments to her parenting instincts. Any undue discipline was well repaid later in life by their teasing, which she endured with good humor. While raising her family, she applied her natural talents to arts and crafts, sewing, knitting, and cuisine. She could always add creative flair to a birthday cake or a costume for a themed party. Later in life, she returned to work as a pharmacist assistant. Naturally interested in people, Vera had many friends and never lacked for social activities. She always had compassion for those less fortunate. She would donate candy to the local orphanage, support children overseas, and knit hats and mittens for those in need. She was dedicated to the church and served as a Stephen Minister. She was loved deeply by her six grandchildren, whom she spoiled creatively and teased affectionately. Vera was tougher than one might guess at first glance. She overcame scarlet fever as a child, colon cancer in her 50s, breast cancer in her 80s, and she lived well into her 90s despite congestive heart failure. With coaxing from her husband John, Vera explored North America’s wilderness. Later in life, she and John traveled extensively throughout the United States. They also took several world cruises and visited exotic destinations like the Amazon, Egypt, Russia, Japan, and China. They were married for 73 years and passed away within days of each other. She will be remembered for her wit, candor, intelligence, and kind heart. Memorial contributions may be directed to Wounded Warrior Projectclick here to contribute or Heifer International click here to contribute To watch the funeral service for Vera please click the link below and enter in passcode and meeting ID. Join Zoom Meeting https://us02web.zoom.us/j/89667730077?pwd=R2M3anpkR1FBU2dRd3R0Zk15dVQzZz09 Passcode: 125981 Meeting ID: 896 6773 0077

Vera Rose Zuzich was born on April 18, 1924 in Detroit. She was the second child of first-generation Croatian immigrants. Though shy and sheltered as a child, she was also competitive and determined. She excelled at school from the start... View Obituary & Service Information

The family of Vera Rose Kerastas created this Life Tributes page to make it easy to share your memories.

Send flowers to the Kerastas family.