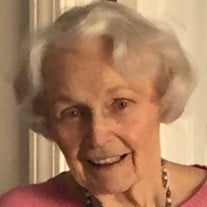 Clancey, Theresa Marie, Age 92 March 8, 2021 Loving Mother of Colleen Tompkins (John), William Clancey, Jr (Marie), Kathleen Clancey, Erin Noel (Tom) Grandmother of Courtney, Jeff, Jay, Conner, and Scott. Great Grandmother of Mackenzie, Zoey, and Weston. Also survived by her brother Raymond Bonenenfant (Patricia). Preceded in death by daughter Philomena, grandson Brian, and son-in-law Tony Raubolt. Born Theresa Bonenfant in Detroit, to her parents Paul and Esther, she had six siblings; Pauline, Paul, Jack, Wendell, Margaret, & Raymond, and was a proud graduate of Immaculata High School. She was very independent minded and said that her Mother would tell people that “she had four sons, two daughters, and Theresa.” Growing up, she spent her summers with her family at Houghton Lake, and it was there that she developed her lifelong love of being near open water. Theresa raised her family in Farmington Hills where she was a member of Our Lady of Sorrows Catholic Church, active in the Altar Sodality, choir, and serving as a Eucharistic Minister. She loved decorating, re-arranging furniture, and gardening in the yard, and took great pleasure in turning her house into a lovely home where she often hosted gatherings for friends and family. Theresa was also a very artistic, and enjoyed sketching, painting, and flower arranging. She also liked to write poetry and you could find her musings jotted down amongst her papers and to do lists. She was often called upon to write and recite prayers for holidays and special family events. Theresa had the opportunity to travel to many states in the country as well as other countries in the world. One of her favorite destinations was Hawaii. Her favorite spot locally was Mackinac Island where her family would vacation for a week for many summers. She loved the ferry ride across the sparkling waters of the Straits, and she never got tired of catching that first glimpse of Grand Hotel in the distance. While on the Island, she relished time spent with her grandchildren who would entertain her with their choreographed plays. Theresa was a very sociable person and made friends easily through church and her gardening clubs. When it came time to move to Fox Run Senior Living, she jumped right in and made a point of sitting with someone new every night for dinner so she could get to know the other residents. She also joined various clubs including the flower club which prepared the dining room tabletops displays. Her favorite activity though was a weekly dice game called Left, Right, Center, that she played with a group of friends who would wager the princely sum of a dime at a time. She also enjoyed regular excursions out to local restaurants, preferably ones that had a view of the water. Family was very important to Theresa and at dinner time she would regularly remind her children that “the faces you are looking at around this table are the people who will stand by and support you until the day you die.” She was also very close to her brother and sisters-in-law as well as dozens of nieces and nephews who would often visit, write, call, or even escort her to out of town weddings. Anxious for great grandchildren, Theresa was thrilled when her first, Mackenzie, was born and she could finally be called Gigi. Her namesake Zoey Theresa, followed a few years later and great-grandson Weston most recently. Her only disappointment was that with Covid restrictions she was not able to meet the last two in person, but made do with virtual visits. A memorial service for Theresa will be held later in the Spring, with Interment at Holy Sepulchre Cemetery, Southfield. Contributions in her memory may be directed to the Fox Run Benevolent Fund

The family of Theresa Marie Clancey created this Life Tributes page to make it easy to share your memories.

Send flowers to the Clancey family.