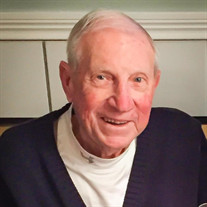 Thaddeus (Ted) Grelak passed away on April 24, 2021, at the age of 90, surrounded by his wife and children. Ted leaves behind his loving wife of 60 years, Caroline Rose, his two children, Diane (Joseph) DiRado and Patrick (Julia), along with six grandchildren, Melissa (Panagiotis) Tzerefos, Nicholas, Nathan, David, Grace, and Lilly and his great grandson Lambros. Ted was born on March 2, 1931 and grew up in Detroit, Michigan. He was drafted into the United States Marine Corps and was stationed in Portsmouth, Virginia. Upon completion of his service, he returned home and joined the Dearborn Fire Department where he worked for 40 years, eventually retiring in 1995. After retirement, Ted didn’t sit still. He enjoyed golfing, worked at Northville Hills and Lyon Oaks Golf Courses for many years as a ranger, drove a limousine for ten years, taught his grandchildren to golf and hit a baseball, attended countless dance recitals, school events, football, golf and lacrosse games, band and choir concerts, tailgates, birthday parties and graduations. Ted always had a lap ready for a grandchild to join him while he listened to or watched the Tigers and smoked his cigar or pipe. During his final years, his loving wife Caroline was by his side every step of the way. Whether it was an evening watching Gunsmoke or the weekend’s golf tournament, playing cards to pass the time, or enjoying their nightly dessert, she looked after his every need. His last years would not have been as full as they were without her constant love and care. Those 60 years together were full of laughs, experiences, celebrations and love and care for one another. Visitation for Ted will be held at O'Brien/Sullivan Funeral Home on Thursday April 29th from 4PM to 8PM. An instate period will be held at St. James Catholic Church in Novi MI on Friday April 30th from 9:30 AM until time of funeral liturgy. Ted lived a full life and loved his family above all else. He will be truly missed by all who knew him. In lieu of flowers, please make donations in Ted’s name to: University of Michigan Trauma Burn Center Attention: Kristy Brown 1500 E. Medical Center Dr. Room UH-1C435 Ann Arbor, MI 48109

Thaddeus (Ted) Grelak passed away on April 24, 2021, at the age of 90, surrounded by his wife and children. Ted leaves behind his loving wife of 60 years, Caroline Rose, his two children, Diane (Joseph) DiRado and Patrick (Julia), along with... View Obituary & Service Information

The family of Thaddeus "Ted" Grelak created this Life Tributes page to make it easy to share your memories.

Send flowers to the Grelak family.