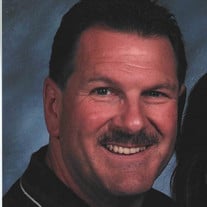 Terry McParlane Age 62 July 6, 2019 Dear husband of Patti for 31 years Beloved father of Shea and Devin. Son of the late Michael and Jo’an. Son in law of Eileen and the late Edward G. Murphy. Brother of Michael (Pam), Chris(Paula), Patsy An Grace (Harvey Bottleson), Pete (Millie), Colleen (Mike) Ellison, Mona (Charlie) Mason, Tim (Ako) and Matt (Mary) Brother in law of Mary Murphy, Gerald (the late Genni), Anne (Dennis) Renaud, Pat (Karen), Mike (Sandy), Bridget (Dave) Carbott, Jim (Debbie), Lisbeth and the late John Murphy Uncle to 30 nieces and nephews and 13 great nieces and nephews Terry was born and raised in Detroit to Michael and Jo’An McParlane and was the 7th of nine children. Growing up, he played CYO sports at St. Mary’s, but football was certainly his favorite. In high school, he was the starting quarterback his sophomore year on the Varsity team. Although he suffered a knee injury that cost him his scholarship to play in college, he never lost his love for the game. He continued his love for football as the biggest Michigan fan ever, never missing a single game. Terry moved out to Colorado in his early 20s with his brother Pete, but came home after a couple years. It was time to get home and win Patti over, and that he did. Terry and Patti got married at St. Mary’s of Redford in 1987 where they both graduated from high school. Terry’s devotion to Patti was full of the most special love possible. He played so many roles in life as a husband, brother, son, and friend, but one of his proudest was a Dad. He absolutely adored his girls, and became their biggest cheerleader in life. He retired after 33 years as a manager at UPS, working incredibly hard for his family every single day. But the family man that he was, you would never know the long hours and stressful days. He never missed a beat when it came to his family. Terry was passionate about service, serving on the board of directors for the CYO as well as Food Gatherers. When the girls went to St. Valentine grade school, he volunteered as the Athletic Director for a couple years. He was truly an avid sports fan and loved all things Michigan, and shared these passions with his family. Terry was a man of great faith and always believed in the power of prayer. The girls can remember every night, even throughout college and afterwards, getting nightly text reminders to say their prayers. Church and faith was a huge part of his upbringing, and he continued that with his own family making it a priority. Life threw Terry another curve ball when he was diagnosed with ALS on September 10, 2018. He ultimately lost the ability to walk, move, and speak. However, his fighting spirit and determination never left. His intense love and devotion for his family kept him going. He was a true family man through and through, and will always be remembered as such. His laugh lit up every room he walked in, and he lived a life of faith and love. Visitation at the O’Brien/Sullivan Funeral Home 41555 Grand River Novi Friday 2-8pm Scripture service Friday 6:30pm followed by personal reflections. In state at St Valentine Church 14841 Beech Daly Saturday from 10:00am until the funeral Liturgy at 10:30am. Interment Holy Sepulchre Cemetery Donations in memory of Terry can be made to ALS of Michigan www.alsofmichigan.org or Augie’s Quest www.augiesquest.org/

The family of Terrence Patrick McParlane created this Life Tributes page to make it easy to share your memories.

Send flowers to the McParlane family.