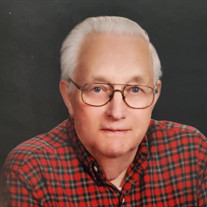 SAMUEL BORNSTEIN died peacefully on July 30, 2020 in Novi, MI at the age of 91. He is survived by his wife of nearly 69 years, Jean Harig Bornstein; daughters, Amy B. (Julie Sherwood) Diebaren of Madison, WI and Sherry B. (Bruce) Innes of Waterford, MI; son-in-law William T. (Kathy) Kern; granddaughter Emily S. (James “Jacob”) Smith of Berkley; great- granddaughters Ava and Mia Smith; brother-in-law Russell (Mary) Harig of Alto, MI, sister-in-law Gail (the late Louis) Harig of Alto, MI and many nieces and nephews. He is preceded in death by his sister Selma Pastor of New Hampshire; brothers Joseph Bornstein of Vermont, William Bornstein of New York, and David Bornstein of California, and their spouses. Sam was born on October 23, 1928 in Boston, MA to Julius and Minnie (Greenberg) Bornstein. He graduated from Milton High School in Milton, MA, served in the United States Navy on USS Tarawa, and received an engineering degree from Michigan State University, where he met his future wife. He had a long career in safety engineering and loss prevention in the insurance industry, including Aetna and Johnson & Higgins. Over the years he and Jean lived in East Lansing, Laingsburg, Kilmanaugh, Bay City, Farmington Hills, and Brighton before settling in at Fox Run Village in Novi. Sam and Jean travelled extensively in the U.S., Canada and many other countries. Sam adored children, was an accomplished woodworker, and donated proceeds from the sale of hundreds of wooden toys to Children’s Hospital. He was an avid bridge player, enjoyed classical music and had a talent for whistling Mozart. His sense of humor was wonderfully dry. He enjoyed and helped organize annual reunions of his former shipmates for many years. Sam’s family is grateful to caregivers and staff at Fox Run’s Rose Court assisted living unit for their kindness and dedication.

SAMUEL BORNSTEIN died peacefully on July 30, 2020 in Novi, MI at the age of 91. He is survived by his wife of nearly 69 years, Jean Harig Bornstein; daughters, Amy B. (Julie Sherwood) Diebaren of Madison, WI and Sherry B. (Bruce) Innes of Waterford,... View Obituary & Service Information

The family of Samuel Bornstein created this Life Tributes page to make it easy to share your memories.

Send flowers to the Bornstein family.