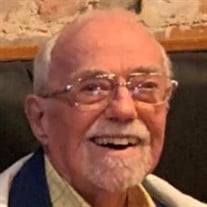 Roy W. Linenberg, age 80, of Evart, Michigan, passed away February, 27th, 2020. He is survived by his beloved wife of 55 years, Sue (Walter), sister Irene Lindgren, his sons, Mark (Michael), Dean (Beth), Paul (Maggie), Michael and John (Deanna), grandchildren, Casey, Marley, Parker, Jenna, Justin, Andrew, Michala, William, Amanda, Evan, Nathan and great-granddaughter Sofia. Roy was predeceased by his sister Rhea Jacuszewski and nephew Eric Comer. Roy was born on May 21, 1939 to the late Howard and Esther (Howard) Linenberg in Detroit, MI. After graduating from University of Detroit High School in 1957, he went on to study engineering at the University of Detroit, graduating in 1962. He belonged to the American Society of Civil Engineers and was a registered professional engineer of the State of Michigan. Roy worked for the Ford Motor Company for over 30 years as a civil engineer, building automotive car and part plants. After retirement from Ford he stayed active in the construction field by consulting for Albert Kahn Associates, Inc, and Walbridge. In 1962, Roy met his lovely wife-to-be, Sue (Walter). They wed on June 20, 1964 at Holy Name Catholic Church, in Birmingham, Michigan. Their family grew quickly, welcoming five sons, Mark, Dean, Paul, Mike and John. As Ford plants sprung up around the country, Roy and his family experienced many American cities, such as Buffalo, Minneapolis, Cincinnati and Toledo, finally settling in Livonia. While his sons were young, Roy loved to be at the Livonia and Redford hockey rinks coaching and cheering on the teams. In the summer, Roy would ‘toil’ for hours driving the speed boat and towing water skiers. The family was known to fill the van with children and gear and head out on an adventure, whether around town or on a weeks-long wild west adventure. In retirement, Roy and Sue continued to travel the States and the world, visiting Africa, South America and Asia. Roy enjoyed entertaining family and friends at their Northern Michigan lakefront home in Sears, where Roy could be found in the kitchen cooking up his famous breakfast casseroles. He loved hunting, woodworking, old cars, boating, cheap cigars and Canadian Manhattans. Visitation will be held at the O'Brien/Sullivan Funeral Home, 41555 Grand River Avenue, Novi, 248-348-1800 on Sunday, March 1, 2020 from 2:00 PM - 8:00 PM with a service at 6:00 PM. Instate Tuesday, March 3, 2020 at Sacred Heart Catholic Church, 9878 US - 10, Evart, Michigan 49631, 231-734-3171, from 11:00 AM until time of funeral liturgy 12:00 PM. Interment will take place at Orient Township Cemetery, Sears, Michigan.

The family of Roy Linenberg created this Life Tributes page to make it easy to share your memories.

Send flowers to the Linenberg family.