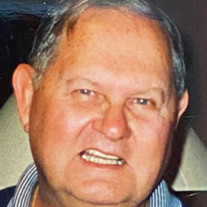 Not sure what to send?

Ronald Gordon Nordstrom Sr. was born to Elmer and Annie Nordstrom on April 12, 1937 in Detroit, MI. He was the youngest of the three Nordstrom children behind siblings; the late Gilbert (Lydia) and Shirley (the late Frank) Arroyo. He is survived by his adoring wife Patti, their four children Dawn, Ron Jr. (Mary), Dale (Colleen), and Peggy and his seven grandsons Nicklas, RJ, Brendan, Joey, Mathieu, George, and Garrett. Ron spent his youth playing sports, but his true love was baseball. He played in multiple City of Detroit All-Star games and had the privilege of pitching at Tiger Stadium. Ron was in the first graduating class at Detroit’s new Mumford High School and would often remind us how nice the school colors of maroon and baby blue were. After graduating high school, he joined the U.S. Air Force where he was trained to be an Air Traffic Controller. He spent his Air Force years stationed at Selfridge Air Force Base in Harrison Twp, MI and at Anderson Air Force Base in Guam. While in Guam, his base team witnessed Ron’s baseball skills and he was selected to play on their traveling team. Being assigned this duty gave him the opportunity to travel around the South Pacific, including Japan, representing Anderson’s baseball team. Team players were given a commemorative money clip that he used and cherished until the day he passed. Ron was most proud of his family, but his pride for the Air Force ranked right up there. Ron’s life changed when his sweet tooth began acting up and he stopped into Brown’s Creamery to order a banana split. Working behind the counter was the prettiest girl he’d ever laid his eyes on, Patti Dunsmore. Being a smooth talker, he asked if he could get a discount on his banana split by supplying his own banana. He left and came back with his own banana, and yes, he got his discount. Patti and Ron were inseparable from that point forward. Ronnie and Patti were married on November 22, 1958, in Detroit, MI. His in-laws, Joe and Ruth Dunsmore welcomed him into the family, and they developed a bond that would never be broken. They started their family in Detroit where Ron was a delivery man for Koepplinger Bakery. They were blessed with their 4 wonderful children before moving to Livonia when Ron changed careers to sell insurance for Allstate in the mid-70’s until his retirement. Ron never lost his love for Sports, so he joined the Ever-7 Sports Club to play softball, touch football and hockey, along with many other social events. The Ever-7 gave him and Patti the chance to build a group of lifelong friends and very special memories. Any Bingo players in the Grand River/Inkster area would know Ron as the Ever-7 bingo organizer guru in the 90’s. Ron played softball into his 50’s, and even got out there and took the field in league play with his own grown children. Golf would eventually replace softball, but he was no less competitive. He spent plenty of time tinkering with his game and trying out all the new gadgets on the market, searching for that elusive hole-in-one that Patti possesses. Ron’s retirement would be spent with Patti, his children, and grandchildren. Although he never knew what it was like to be a grandpa to girls, he felt blessed to have his seven grandsons who he adored. He was always the proud grandpa in the stands and in the audience for all their sporting and musical events. In later years, he would come up and sit in his van to watch his sons play softball with his grandsons and their friends. The whole family enjoyed taking multiple vacations together where you would find Ron sitting next to the pool wearing one of his bright colored shirts with a smile on his face. West Side Coney in Novi was a second kitchen for Ron and Patti. It wasn’t just about grabbing some food, the girls who waited on them had become a second family. He knew as much about their lives as he did about his own kids. It was a comfortable spot to have a meal amongst extended family and Ron genuinely loved and appreciated all his gorgeous and beautiful friends there. Ron cherished his family and of course, we cherish him. He will be missed more than words can say, but he has left us with a lifetime of beautiful memories and moments to hold on to until we meet again. A memorial for Ron will take place on June 28, 2022, at the O’Brien-Sullivan Funeral home at 41555 Grand River, Novi, MI 48375. The family will be there to greet family and friends from 3-8, with a service at 7:00. He will be interred at the Great Lakes National Cemetery, 4200 Belford Road, Holly, MI on Thursday, July 21, 2022, at 11:00 a.m.

Ronald Gordon Nordstrom Sr. was born to Elmer and Annie Nordstrom on April 12, 1937 in Detroit, MI. He was the youngest of the three Nordstrom children behind siblings; the late Gilbert (Lydia) and Shirley (the late Frank) Arroyo. He is survived... View Obituary & Service Information

The family of Ronald G Nordstrom Sr. created this Life Tributes page to make it easy to share your memories.