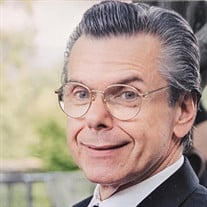 Roman Orest Marchak, 74 years old, of Novi, Michigan, passed away on January 19, 2022. Roman was born in Germany to Teofil and Sophia Marchak. He grew up with his sister Christina who cared for him at times while his mother and father worked, especially during the war. They immigrated to America and settled in Dearborn, Michigan. While he lived in the Detroit area and was born in Germany, he was Ukrainian thru and thru. His family belonged to St. Michael’s Ukrainian Catholic Church. He grew up celebrating traditional Ukrainian holidays full of wonderful foods like kutia, borsch, pierogies and kapushnaki. Traditions he would later pass on to his own family. He contracted Polio at 6 years old and had to adjust to the physical challenges that come with a disability. He truly became ‘handi-capable’ very quickly. As a teen, he loved spending his time with his best friend Alan working on experiments with “rocket fuel” and fixing electronics as a business. There were plenty of stories of exploding flower boxes and experiments in the backyard. The only thing his Dad would say in response was “Roman, WHY??” He attended Fordson High School (Class of '65) where he met lifelong friends Carter and Wallace. They had shared passions for Ham radios, electronics, and photography. As he got older, he attended The University of Michigan to study Electrical Engineering which sparked his passion for automotive engineering. His graduation present was the first of 2 Corvette’s he owned in his life, and he always enjoyed a drive with the T-tops off! Even when he later had kids, he still found ways to squeeze a family of 5 into the 2-seat metallic red ‘79 Stingray and take a drive. In his late 20’s, he met Sally. They fell in love over a couple of Harvey Wallbangers. In no time, they were married and went on to share 48 wonderful years together. It was a story of opposites attract. Roman had the technical, detailed, methodical mind while Sally is creative, spontaneous & whimsical. They complimented each other in every way. They quickly started a family, complete with Maria, Tanya and Michael. As a family they loved to travel in their Chevy Suburban aka the "Marchakmobile", always making time to pull off at roadside vistas to enjoy the view. He loved heading out west, sunsets, mountain vistas, and waterscapes while taking amazing photographs of the beautiful scenery along the way. He captured precious family moments through movies and photos. He loved to fire up the 8 mm movie projector and slide projector and entertain his family for hours. His photographs will be lasting treasures that will be cherished forever. He will always be remembered as a loving and patient father. He would tell his family often, “You don’t realize how lucky we are.” Later in life, Roman became a cherished grandfather to 8 grandchildren – Sebastian, Isabel, Jacob, Nicholas, William, Alexis, Benjamin and Claire. He became Papa. He always encouraged them to think critically, ask questions, watch PBS television and tried to instill a love of science & engineering. Professionally and in his daily life, he was a methodical engineer with the sharpest memory for details, always problem solving for those around him. He enjoyed working on car projects, tinkering in his shop at home and running a small business called Martek on the side. One of his career highlights was working with Paul Newman’s Trans Am race Team on the novel technology of electronic fuel injection. Roman has 9 patents in his name. Later he became passionate about politics and donating to political movements. Roman’s strength, determination and perseverance to live a full life, despite his physical challenges, set an example for his family and those who knew him to never let anything get in your way. His cautious optimism will continue to guide those who loved him. Hope for the best, but plan for the worst. His love for his family, and all he did for them as a father and husband, will be a light that continues to shine within them forever. There was a private viewing at O'Brien Sullivan Funeral Home. The public service and burial will be located at Holy Sepulchre Cemetery on Wednesday, January 26th at 1pm. If you wish to attend the public service and burial,, please meet at the cemetery gates off of 10 Mile and Beech Daly just before 1:00pm In lieu of flowers, donations can be made in Roman’s honor to the Mayo Clinic or PBS Television.

Roman Orest Marchak, 74 years old, of Novi, Michigan, passed away on January 19, 2022. Roman was born in Germany to Teofil and Sophia Marchak. He grew up with his sister Christina who cared for him at times while his mother and father worked,... View Obituary & Service Information

The family of Roman Orest Marchak created this Life Tributes page to make it easy to share your memories.

Send flowers to the Marchak family.