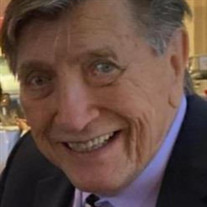 Robert Passkiewicz, affectionately known as Bob Pasky, was born October 31, 1936 in Detroit, Michigan. He had four brothers and two sisters (Raymond, Fred, Art, Rita, Joe, and Patricia). Bob was known to be a charmer and a jokester even from a young age. Together with his brother Joe, he would play pranks on their sister Patricia, which always kept them laughing. But perhaps, her not as much. He was raised to be very proud of his Polish Catholic heritage. He was baptized, received his first holy communion, and did his confirmation through the Catholic Church. Later in life he was very proud to be an usher for Saint Williams Catholic church for many years. Bob was passionate about his career and took a lot of pride in his work. He started working at 13 years old for his brother Fred’s construction company. After graduating High School, he joined the Air National Guard and served for four years. After that, he went to beauty school, but admittedly, no one quite knows why. We suspect it was just so he could have great hair his entire life, which he accomplished. He later joined Fred as a partner in his caulking and weather stripping business. After Fred passed, Bob and Joe began the company Pasky and Sons. Bob’s two sons, Bob and Steven, and his nephew Chuck also joined the business. Together with his family, he grew the company into a well-respected successful business. Bob was blessed with a large family. He fathered seven children Michelle (David) Williamson, Vernetta “Lizz” Casady, Sandra (Eric) Ridenour, Andrea (Jennifer) Curtis, Shawn Adler, Bobby Passkiewicz, and Steven Passkiewicz, and was the proud grandpa to 11* grandkids, and great grandfather to 5** great grandkids. Bob also had many dogs as part of his family over the years. Although one of them ran away from him every chance he got, all of them loved his cuddles and attention. And no pup loved him more than his “Baby”. Baby was treated like a true queen. She traveled the world with her nails painted pink, sitting right next to Bob, enjoying her McDonalds French Fries. Baby was the true love of Bob’s life, and she knew it. Bob loved to spend his time cooking for the family. Everyone knew he was an amazing chef, and the family loved to gather around his table to share a meal together. His most famous dishes included his olive sauce, prime rib, Kapusta, and chicken noodle soup. He would even take special requests, like two pounds of sauteed mushrooms after the grandkids arrived from out of town at midnight. Bob spent a lot of time camping, traveling, spending time with family, and playing bridge. He became a master bridge player when he was 65 years old, which Bob was very proud of. Bob loved movies, especially World War II movies. He always had special date nights with the family to get Italian food and go to the theater. He’d always let you order whatever you wanted, but you’d better finish your plate. The grandkids especially remember their special french fry dates with him. Only a grandpa would let you order seven orders of fries. Bob is fondly remembered for his sense of humor. He would say, “I love you”. “I love you too, Dad”. To which he’d reply, “I love you three”. He’d ask, can I pay my Visa with my Master Card? He’d tell you, “put your finger there”… if you didn’t know better, your finger would get whacked with the closet object to grandpa. He’d say, “love you little, love you big, love you like a big fat pig.” If you asked him how long till dinner? An hour and a half. How long till we leave? An hour and a half. How long will Bob’s service last? …An hour and a half. Robert was preceded in death by his parents, Joseph and Wanda Passkiewicz; his brothers Raymond, Frederick, Arthur, and Joseph Passkiewicz; his daughter Vernetta “Lizz” Casady; and the mothers to his children, Vernetta “Toni” Burnett and Ruth Benham. His sister, Rita Kurosky, joined Bob in heaven just one day after him. Bob lived a full and amazing life filled with family, laughs, love, and excitement. His charisma and good looks stayed with him to the end. I’m certain he managed to flirt with the nurses even in his final days. He was lucky to spend lots of time with his family, and even made a final trip to Nebraska in December of 2021. We can all cherish our beautiful memories with our beloved brother, father, and grandfather. For a man like Bob, no amount of time would have been enough for us, but we can be grateful for the many, many years we spent together. We honor his life and our memories of him with our grief. Written with love, From your favorite oldest granddaughter, Rachel *Robert’s 11 Grandchildren: Rachel Huggins, Rebecca LaFave, Danielle Munoz, Deborah Ridenour, Katie Williamson, Austin Curtis, Anthony Adler, Alexander Adler, Sydney Passkiewicz, Robert Passkiewicz III, and Nicholas Passkiewicz ** Robert’s 5 Great-Grandchildren: Dillon Huggins, Jillian Munoz, Carson Munoz, Milo Huggins, and Grayson Williamson . Visitation at the O'Brien/Sullivan Funeral Home, 41555 Grand River Avenue, Novi, 248-348-1800 on Friday, February 25, 2022 from 2:00 PM - 8:00 PM with a rosary service at 3:00 PM. Instate Saturday, February 26, 2022 at St. James Catholic Church, 46325 W 10 Mile Road, Novi from 10:00 AM until time of funeral liturgy 10:30 AM.

Robert Passkiewicz, affectionately known as Bob Pasky, was born October 31, 1936 in Detroit, Michigan. He had four brothers and two sisters (Raymond, Fred, Art, Rita, Joe, and Patricia). Bob was known to be a charmer and a jokester even from... View Obituary & Service Information

The family of Robert R. Passkiewicz created this Life Tributes page to make it easy to share your memories.

Send flowers to the Passkiewicz family.