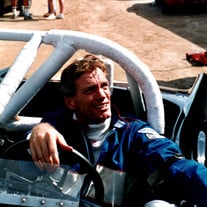 Robert “Bob” Stirling Moser passed away peacefully on Saturday, December 7, 2019, at the age of 70. Bob was born on September 1, 1949, in Washington D.C. to Mary Jane and Joseph Moser. Beloved husband of Sharon Spoto; loving father of Joseph “Joe” Moser (Dayna) and Robert “Rob” Moser II (Christie); and the late Kelly Moser; dear grandfather of Joseph “JJ” II, Evelyn and Adeline; beloved brother of Joseph (Pam). Bob was born in Washington DC, and grew up in Silver Spring, MD and Rockville, MD. He attended the University of Maryland and graduated with a Bachelor’s Degree in Economics in 1971. He married Sharon Moser in 1975 and had three children, Kelly, Joe and Rob. Bob was an Executive with American Motors Company (AMC) and Chrysler Corporation. Later, he owned and managed Westland Car Care Company, and helped lead the Vehicle and Infrastructure Integration Consortium (VIIC). An avid athlete, Bob loved to compete in long-distance endurance sports. He completed the 1990 Ironman World Championship in Kona, Hawaii, after completing a long list of Ironman 70.3 Triathlons and Marathons both Nationally and Internationally. He regularly combined adventure with his sports, often shoving off for week-long solo treks through the Everglades National Park on kayak, solo night diving shipwrecks in the Florida Keys, or all-day deep-sea fishing Motorsports were a major part of his life. Whether racing or wrenching, he loved the competition and loved winning. Racing cars became the dominant family sport, with Joe, Rob, and Sharon all getting behind the wheel at times. Bob won multiple championships in multiple cars across SVRA, SCCA, NASA, and Motorola Cup racing series. In the last few years, Bob successfully passed the racing bug to a new generation, with his grandson (JJ Moser) picking up kart racing. At his core, Bob was a fighter who lived each day to the fullest. His determination and grit in conquering aplastic anemia in 2012 was inspirational. In the spring of 2019, he was diagnosed with acute leukemia. Never one to feel sorry for himself, Bob lived his last months and days as he did his entire life, enjoying the company of family and close friends, rebellious to the very end. Bob will be missed by all who had the pleasure of spending time with him. The family will receive friends at the O’Brien/Sullivan Funeral Home 41555 Grand River Novi Saturday Dec. 14, 2019 from 2:00pm until the celebration of his life at 3:00pm. In lieu of flowers, memorial contributions may be made to the Aplastic Anemia and MDS International Foundation. www.aamds.org

The family of Robert Stirling Moser created this Life Tributes page to make it easy to share your memories.