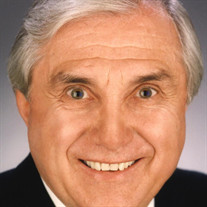 ROBERT GEORGE CHURELLA WENT TO BE WITH THE LORD ON JULY 1, 2020. Robert “Bob” Churella was born on September 12th, 1931 in Detroit, Michigan to Vasile and Melenia. He was the seventh born of eight children and the last surviving sibling to Melanie, Viola, Chuck, Olympe, Maria, Jacob and Virginia. Bob was born in the family home on Hastings Street in the Black Bottom area of Detroit. He attended Highland Park High School, where he was a standout athlete in both football and track. He was awarded All-State honors in football. Bob attended Michigan Normal College (Eastern Michigan University) and Wayne State University on a football scholarship. He played semi-professional football for the Highland Park Bears. Bob served in the Air Force during the Korean War, enlisting in 1952. While in service, he continued to show his athletic prowess, winning the Golden Gloves Boxing Championship in Texas. Even more importantly, he married his sweetheart Esther. They had been acquainted on and off for years, but after his sister Maria reintroduced them, it didn’t take Bob long to decide she was “the one,” and they were married just a few months later. Bob began his remarkably successful career in sales in 1955, as a shoe salesman for Kinney Shoes. He was promoted to Manager at their new “Flagship Store” in the Northland Shopping Center, the first suburban mall in the United States. Bob changed career paths in 1962 when he entered the insurance industry as a salesman for Paul Revere Insurance Company. He quickly rose to the top of the sales force, leading the company in life and disability insurance sales. A few years later, he went on to sell insurance for State Mutual Insurance Company. In 1970, Bob started his own company: Financial Designs, Inc., a life, health and property casualty agency. Bob oversaw the evolution and expansion of the flourishing company now known as FDI Group. Always the entrepreneur, Bob was involved in creating new opportunities and turning them into successful business deals throughout his lifetime. As determined and successful as he was in business, nothing was a greater priority in his life than his love and devotion to his family. He and Esther remained a loving couple for 67 years and were blessed with three children Robert “Robb” Jr. (Diana), Mark (Leslie), and Melanie. They were additionally blessed by six grandsons Mark Jr. (Amy), Ryan (Danielle), Josh (Carlee), Nathan, Justice and James, as well was six great-grandchildren Jacob, Lola, Cruz, Ryker, Penelope and Brooks. Bob was loving, kind and generous to all who knew him. He made friends easily and often, and maintained those friendships, even back to his childhood. Bob drew people to him wherever he was, with his engaging personality and his warm, winning smile. Bob’s faith in his Heavenly Father through his Lord and Savior Jesus Christ was unwavering. He was devoted to his faith and his family, he was loved by family and friends, and he will be dearly missed. A Memorial Service will be held at a later date.

The family of Robert George Churella created this Life Tributes page to make it easy to share your memories.

ROBERT GEORGE CHURELLA
WENT TO BE WITH THE LORD ON JULY 1, 2020.

Send flowers to the Churella family.