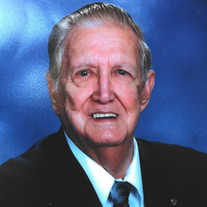 Robert Brown February 1, 1929 – April 10, 2021 Robert (Bob) Brown, age 92, passed away peacefully of congestive heart failure under the gentle care of Angela Hospice. Bob was preceded in death by his parents, five brothers, one sister and his loving wife of 42 years, Donna Marie. He is survived by his three children, Michael (Kim), Kerri Ann (Kent) Anderson, and Kenneth (Kimberle), his two grandsons Steve Anderson and Kyle (Stephanie) Brown, and two great grandchildren twins Evan and Eliana Brown, and sister Lorry Cahill, and dear friend and companion Virgiline Mitchell. In his early life, Bob had many odd jobs including the formation of his own band “Bob Brown and the Music Masters”. He was also a cab driver where he learned the city streets of Detroit which helped him later for his work when he joined the Detroit Fire Department in 1951. Upon completing his firefighter training, he was drafted into the United States Army during the Korean War. After serving, he resumed his firefighter duties and went on to serve 37 years, rising through the ranks and achieving the position of Battalion Chief 4. He retired in January 1989. Fishing, camping and canoeing were the outdoor activities that Bob enjoyed the most in his early adult years. He played clarinet in the Detroit Fire Department Band and loved marching in the parades down Woodward Avenue. He also owned a window washing business for 20 years. He was a member of the Knights of Columbus for over 60 years, serving several times as Grand Knight. Bob spent many years in retirement golfing and doing volunteer work. One of his favorite vacation destinations was Las Vegas. He enjoyed watching the Detroit Tigers and Notre Dame football. He was one of the best card players around, his games were Pinochle, Gin Rummy and Euchre and he played to win! Visitation will be at O’Brien/Sullivan Funeral Home 41555 Grand River Avenue Novi, MI 48375 on Thursday April 15th, 2021 from 5 – 7 PM. Instate will be on Friday April 16th, 2021 at St. Gerald Catholic Church 21300 Farmington Road Farmington, MI 48336 at 10:30 AM until time of funeral liturgy at 11:00AM Interment will take place at the Fireman’s Fund Memorial at Mt. Elliott Cemetery in Detroit.