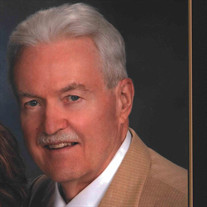 Robert (Bob) Tillbrook Richards Brinton, passed away peacefully at age 82 on October 19, 2020 Bob was born December 15, 1937 in New Castle PA. He was the son of Robert and Elizabeth Brinton. He resided in New Castle until he graduated from college at which time he moved to Dearborn, MI, a suburb of Detroit, to work for the Ford Motor Company. Bob attended grade, middle and high school in New Castle, PA, and graduated from high school in 1955. He attended Washington & Jefferson College, Washington, PA the following two years. He was a member of the Lambda Chi Alpha Fraternity. He transferred to Ohio University, Athens, Ohio, and received a Bachelor of Science degree in Electrical Engineering in 1960. Bob had Army Basic Training in 1962 at Fort Knox, Ky., and was in the Army Reserves for eight years. He received his Michigan Professional Engineer’s License in 1970. Bob worked at the Ford Motor Company for 33 years, retiring in 1993. He started in the Rouge Steel Division and later transferred to the Ford Glass Division. He held supervisory and management positions while working at domestic and foreign locations. When returning to the Detroit area, he worked at the Renaissance Center, and in 1993 retired from the Lincoln Park Research Facility. After retiring, Bob married Carol Ann Snapp (Brinton) on April 27, 1993 in California. They met at Ford Motor and enjoyed traveling with several groups, including the Nomads. Bob’s interests included bowling, golf, water skiing, travel, church and investment activities. He was an Elder at the First Presbyterian Church of Dearborn, MI and participated in many of their programs. He also was a board member of the American Association of Individual Investors. Given the global Covid-19 pandemic, a small private service is being held. Bob will be laid to rest in the mausoleum at Acacia Park Cemetery in Beverly Hills, MI alongside other family. At Bob’s request, the family has requested no flowers or gifts, but that memorial contributions can instead be directed to: Wounded Warriors Project 4899 Belfort Road Suite 300 Jacksonville, FL. 32256 (Tax Ref: 501 (c)3 EIN# 20-2370934 www.woundedwarriorproject.org or Fox Run Resident Care Fund 41200 Fox Run Road Novi, MI 48377 (Tax Ref: 501(c)3 EIN # 52-229127

Robert (Bob) Tillbrook Richards Brinton, passed away peacefully at age 82 on October 19, 2020 Bob was born December 15, 1937 in New Castle PA. He was the son of Robert and Elizabeth Brinton. He resided in New Castle until he graduated from... View Obituary & Service Information

The family of Robert Tillbrook Richards Brinton created this Life Tributes page to make it easy to share your memories.

Send flowers to the Brinton family.