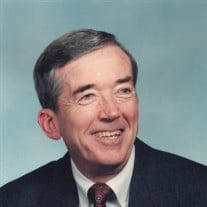 Robert Lawrence Brennan passed away on April 8, 2020. He was born on May 12, 1930 in Detroit, MI to Pearl and Lawrence Brennan. Robert graduated from the University of Detroit in 1952. He was a Korean War Veteran, serving as a Sergeant in the United States Army. Upon his return home he married Elizabeth Ewald (1956) with whom he had four daughters. Robert was very proud of his Irish Heritage (his 1970’s CB “handle” was “Irish Rover”). He married Carol Ann Sobaszek on February 19th, 1982. Robert was a lifelong, devout Catholic, who at the time of his death was a parish member of The Catholic Church of the Holy Family, Novi. He retired from Cadillac /General Motors after 31 years of loyal work, and then set out to travel the world with his loving wife, Carol. Among their favorite trips was travelling via Orient Express, and of course, multiple trips to Ireland. A patient, gentle soul, Robert is survived by his wife, Carol, daughters Tina Mannix (William), Beth Diehl (Lon), Michelle Brennan & Mary Cook (Kevin), Grandchildren, Kristin Mannix, Michael Mannix, Clark Brennan Diehl & Avery Cook, 3 Great-Grandchildren and his Mother-In-Law, Josephine Sobaszek. Robert was preceded in death by his younger brother, and only sibling, William Brennan. The family extends their deep gratitude to the many medical professionals at Ascension Providence Hospital who cared for Robert. Covid-19 prevented hospital visitation but through daily communication with the nursing staff and physicians, Robert’s family felt their kindness and was comforted to know that he was in good hands. The circumstances of the current pandemic will delay the memorial Mass and internment in Great Lakes National Cemetery until later this summer. Robert’s daughters fondly remember his nightly instruction, “Don’t forget to say your prayers, Shorty”. Tonight we give thanks for having so many great years with such a loving, kind-hearted Father as you, Dad.

Robert Lawrence Brennan passed away on April 8, 2020. He was born on May 12, 1930 in Detroit, MI to Pearl and Lawrence Brennan. Robert graduated from the University of Detroit in 1952. He was a Korean War Veteran, serving as a Sergeant in the... View Obituary & Service Information

The family of Robert Lawrence Brennan created this Life Tributes page to make it easy to share your memories.

Send flowers to the Brennan family.