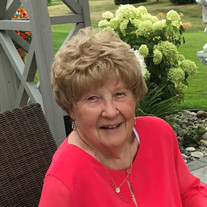 Rita Kurosky, died Saturday, February 19, 2022, at her home in South Lyon, Michigan where she lived with her daughter Laurie and her husband Jerry. She was 91 years old. Mrs. Kurosky was born Rita Theresa Passkiewicz in Detroit to parents Wanda and Joseph Passkiewicz. Her second language was Polish. Joseph Kurosky was a close friend of the family when he returned from WWII, Rita and Joseph began dating and they married in 1948. She worked at Detroit Diesel Allison for thirty years before retiring. She is best known as the “energizer bunny” to describe the energy she had. Not only did she work full time in the programming office but also sold Avon, Mitchel Greeting Cards and Beeline fashions. In addition to raising her family, cooking was her favorite past time and Polish food was her expertise. Her recipes were taught to her children and grandchildren by cooking side by side and these are memories each person will always have making pierogi, golabki and kapusta with Mom and Grandma. When you visited Rita you were greeted with hugs that warmed your heart and then asked to join the meal prepared with all your favorite dishes. Joe used to say,” If you leave hungry, then it’s your own fault.” After retirement, Rita and Joe traveled throughout the states and Maui, Hawaii using their timeshare. They enjoyed collecting heritage information about their family tree that was published in a family legacy book. In addition, she danced with the Mala Polska (Little Poland) Dance Ensemble for five years. She is survived by her five children Darlene Schneider, Denise Sottosanti (Joseph), Elaine Sottosanti (Paul), Gene Kurosky (Carrie) and Laurie Peruski (Gerald), twelve grandchildren Donald (Suzanne), Joseph (Caroline), Jason (Teresa), Angela (Brian), Anthony (Nicole), Justin (Michael), Nicholas (Adam), Jessica, Jeremy (Eric), Rachael (Kenneth), Katelan (Brendan), Nathan and nine great-grandchildren, Ethan, Maria, Kaleigh, Nolan, Braden, Colton, Evelyn, Jolene and Joseph. A visitation will be hosted on Friday, February 25th at 2:00 PM – 8:00 PM at the O’Brien-Sullivan Funeral Home at 41555 Grand River Ave. In Novi. A Mass will be celebrated at 10:30 AM on Saturday, February 26th at St James Catholic Church on 46325 W. 10 Mile Rd in Novi with an instate period starting at 10:00 AM. Donations in memory of Rita can be made to www.seasonsfoundation.org.

Rita Kurosky, died Saturday, February 19, 2022, at her home in South Lyon, Michigan where she lived with her daughter Laurie and her husband Jerry. She was 91 years old. Mrs. Kurosky was born Rita Theresa Passkiewicz in Detroit to parents... View Obituary & Service Information

The family of Rita Kurosky created this Life Tributes page to make it easy to share your memories.

Send flowers to the Kurosky family.