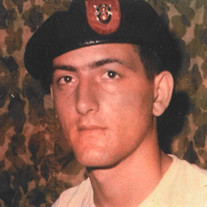 June 26, 1946 – December 04, 2021 Richard Steward, a resident of Holly, passed away on December 4, 2021, at the age of 75. Richard was born in Detroit, Michigan, was adopted, loved and raised by Beverly Aldrich. Richard was a beloved and faithful husband to Carol Lillian (Domeraski) for 53 years. Through ups and downs, thick and thin they were by each other’s sides. The closest of confidants, the best of friends and the love they shared was an inspiration to others. He was a loving father to Richard (Jeri) Steward and Heather (Giovanni) Bravi. Caring and proud Grandfather to Taylor, Savannah and Carlo. Richard is also survived by many cherished family members and friends (Inlaws and Outlaws). Richard proudly served his country in the United States Army as a Green Beret in the 7th Special Forces Group. He was enlisted in the armed forces from November 1964 to November 1970. He worked many jobs while putting himself through schools and supporting a family. He then worked for General Motors as a Millwright for 30 years before retiring. Richard worked hard and played hard. He enjoyed life riding his Harley Davidson motorcycle and spending time with family and friends. He was an avid gunner, an expert of small arms and an exceptional outdoorsman and hunter. He enjoyed getting away to Manistee or Myrtle Beach but truly felt at home in Walled Lake or in Holly. He was a devoted family member and loyal friend. Richard was always there to be “The Man” in any and all situations, to listen, to advise, and/or to take action. He always had a presence about him, to find a solution to any and all problems. To have this man on your side was to feel as if you could conquer the world. To know him, to love him and to be loved by him was an honor and one of life’s treasures. He would simply put it as – “It was a grin” A memorial visitation will be held at The O'Brien/Sullivan Funeral Home on Sunday December 19th beginning at 3PM until 7PM A memorial mass will take place on Monday December 20 at St. Williams Catholic Church with an instate period at 9:30AM until time of liturgy at 10AM.

The family of Richard F. Steward created this Life Tributes page to make it easy to share your memories.

Send flowers to the Steward family.