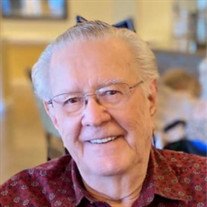 Richard E Peel, Sr (Dick), 92, went to be with the Lord on April 26, 2020 at Ascension Providence Park Hospital, in Novi, MI after succumbing to Covid-19. Dick’s family would like to thank the staff at Ascension Providence Park Hospital on the Covid floor for the care and love that he was shown in his final days. The family would also like to thank the staff at Oakmont Senior Living Northville, and Pomeroy Living Northville for their care since 2012. Dick was born on July 28, 1927 in Providence, Rhode Island. Dick is preceded in death by his father Ernest A Peel and mother Louis M Peel, his daughters Holley and Barbara, and his sister Barbie (Alden) Leach, granddaughter Christy, and grandson Brian (BJ). Dick is survived by his loving wife of 43+ years Barbara M Peel, brother Charles Stanton Peel, his sons Richard (Annette) Peel Jr., Chris Peel, John (Kim) Enright, Ted (Shelley) Enright, daughters Renee Enright and Daryl Mueller, grandchildren Marc, Alex, Coryelle, Kylie, Robert, Elaina, Elliott (Ashley), Christopher, Evan and Morgan, great grandchildren Ethan and Aria. Dick was a veteran of the US Army after being drafted towards the end of World War II and is a proud graduate of Cornell University. He enjoyed a long and proud career as an engineer at Ford Motor Company where he was involved in many new product launches including the original Ford Taurus and Lincoln Town Cars. He was an incredible handyman and spent time on projects in his workshop. He enjoyed spending time with his loving wife, family and friends. Also, very dear to Dick was his involvement in his church. He was a very dedicated parishioner and enjoyed singing in the choir. Dick was technologically savvy and used his computer for many projects including newsletters for his church, and the annual Christmas letter that he sent out to family and friends. He also was fascinated with genealogy, and spent long hours researching his family history and documenting it. He took pride in everything that he was involved with in his life, and it showed by his attention to detail and meticulous nature. During the summer months, Dick and Barbara enjoyed spending time Up North at their place in Charlevoix MI. He particularly enjoyed sharing the time with family. Being that he grew up near the east coast, living on the water was near and dear to him, enjoying boating and swimming. He also supported the Charlevoix Courier by proofreading and sending corrections to the editor. He will be greatly missed as a father, husband and overall great human being. A memorial service for Dick will be scheduled at a later date when restrictions are lifted or eased. He will be interred at Oakland Hills Memorial Gardens in Novi, MI. In lieu of flowers, donations can be made to an Alzheimer’s Association www.alz.org in Dick’s name.

The family of Richard E. Peel created this Life Tributes page to make it easy to share your memories.

Send flowers to the Peel family.