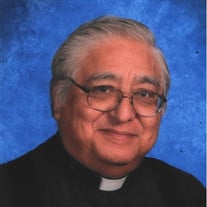 Rev. Raymond Paramo, CSB Jan. 28, 2020 -- Fr. Raymond Paramo, CSB passed away on Monday, January 27, 2020. Fr. Paramo dedicated more than fifty years and all of his ordained life to Catholic Central. He was known for his physics, mathematics, and religion lessons, and also instituted the Dillon Award, which is given annually to the senior with the highest G.P.A. at graduation. “Ray had an extraordinary ability to remain connected with his former students,” said Principal Fr. Patrick Fulton, CSB, “He was a cherished friend and mentor to many students and staff. His wit and keen intelligence were matched only by his love of the arts and music but all of this was overshadowed by his love for his students. He will be sorely missed.” “Fr. Paramo was a testament to the Basilian tradition of excellence at Catholic Central, his devotion to CC serves as a great example for us all,” said Ed Turek ‘85, CC President. Father Raymond Paramo was born to Ramon Paramo and Catherine Suarez de Paramo on January 14, 1937 in Houston, Texas. He was the oldest of seven children. He attended public school for most of his early schooling until just before high school, when he was invited by Fr. Francis Murphy to take the entrance examination for St. Thomas High School, the Basilian school in Houston. He was accepted and later graduated valedictorian of his class. Upon graduation he decided to join the Basilian Fathers novitiate in 1955. That year he and six others joined the Basilians from St. Thomas. He was professed and went to Toronto, Windsor, and Detroit for his education. Over the years he studied at St. Michael’s College in Toronto, the University of Toronto, the University of Windsor, University of Detroit, and Madonna University. He taught at Assumption High School in Windsor, Ontario before ordination. He was ordained in Houston in December, 1966 with Fr. Bob Power and Bishop Ricardo Ramirez. After theology and ordination he was appointed to Catholic Central and has been here for all of his ordained life. He taught physics, mathematics and religion. He has always worked to give recognition to academic achievement at CC. He started the Dillon Trophy in 1968 when he realized that there was no recognition given for the highest G.P.A. for a graduating senior. Fr. Paramo was recognized throughout the city for his successes in Science Fair. He was Dean of Students and Vice Principal, and for many years he was Missions Director. When he ran the Bookstore it became the first school operation to be computerized. He was perhaps most known for teaching a religion course intended for students that asked the difficult questions about the link between God and science. Many still remember the answers. Because of failing health after his second heart operation he retired from the classroom in 1995. He was elected chairman of the Catholic Central School Board soon after and served in that capacity until 2010. He served as Editor-in-Chief of the ALUMINATOR magazine from 2012 until 2017 when he retired indefinitely. To read more about Fr. Paramo’s 50 years at Catholic Central as well as some former student testimony about their time in his classroom, please read our article in the Fall 2017 ALUMINATOR. He is survived by his paternal aunt and godmother Dolores, his six siblings, thirty-one nieces and nephews and numerous grand and great-grand nieces and nephews. Funeral arrangements are as follows: Wake on Thursday, January 30 from 3:00 - 7:00 PM in the Catholic Central High School Chapel 27225 Wixom Road Novi, MI 48374 with funeral Liturgy to follow at 7:00 PM In lieu of flowers, please consider a donation to the Paramo Scholarship Fund. (put “Paramo Scholarship Fund” in comments box)

The family of Fr. Raymond Paramo CSB created this Life Tributes page to make it easy to share your memories.

Send flowers to the Paramo family.