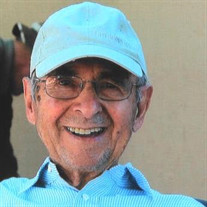 Ralph Conti Sr. November 6, 1927 - January 25, 2020 Well done, good and faithful servant… Enter thou into the joy of thy Lord. ----Matthew 25:23 On November 6, 1927 Ralph Conti was born as the last child of Biagio Conti and Maria Volpe living at 8639 Navy Street, Detroit Michigan. His three older sisters were Loretta (Lora), Elizabeth Rosemarie (Lisa or “Elizabetta”), and Filomena (Florence). On June 27, 1953 at St. Peters Lithuanian Parish of Detroit, Ralph married Aggie (Agatha Anna Romaine). Then, he built his own house at 22992 Leewin Detroit, Michigan where he and his wife raised their eight (8) children, namely: Ralph Jr (1954), Judith (1956), JoAnn (1957), Mark ((1958)—deceased in 2000), Blaise (1961), Agatha (1962), Maria (1965) and Joseph (1966). Ralph is survived by many nieces and nephews as well as 6 grandchildren, namely, David Conti, Agatha Molly Conti, Ella Reimann, Jett Reimann, Nicole DeLancey (children- Jonah, Victoria, Arianna & Sofia), and Lindsy Hanzel (children with Garret: Henry and Josephine). After finishing high school, Ralph served in the Navy and then attended Henry Ford Trade School to become a brick mason. He also joined the Detroit Fire Department ---eventually becoming a Captain and then a Battalion Chief before retiring. Throughout his life Ralph always had a dog or dogs and as a favorite pastime took them hunting and fishing. He also appreciated working with wood, either on the lathe or carving and painting birds and duck decoys. Like his mother, he spent hours gardening in peace. Like his sister, Lisa, he cherished reading. In his youth he was a pretty good basketball player and in his middle ages he thoroughly enjoyed raquetball. Overall, he was fairly well rounded. Ralph’s highest priorities, though, revolved around his Catholic Faith and his family. He, his wife, and his family attended mass every Sunday where they learned and flourished in the vibrant St. Eugene/Corpus Christ communities. In addition, he worked extra hard to send all of his children to parochial grade schools and high schools. During their many years of marriage, as witnessed by all of his children, Ralph showed his wife, Aggie, his deep love and commitment to her, through his words and actions. January 30, 2020 Private Burial at Holy Sepulchre Catholic Cemetery Note: January 30th was Ralph’s father’s birthday, as well as, the same day his wife, Aggie, was buried just one year earlier in 2019. And according to Ralph’s niece Christine, “No coincidences is what I always say. I really think the significance has to do with the family being complete now on the other side --------- The birth date of the head of the family (Biagio) and the oldest member of that nuclear family that was our mother’s/(Lisa’s) original family, AND the commemoration of the death of the youngest and last member (Ralph). AND all the Conti kids knew for certain that Aggie was the love of Ralph’s life. Ralph highly valued all children and was staunchly Pro-Life. Please donate any memorial contributions to Right-to-Life of Michiganclick here to contribute Following are a few writings about Ralph from people who loved him: ********************************************************* Writing by Anne Marie and Jim Eastman--- his sister and brother-in-law OUR THOUGHTS: RALPH WAS A MAN WHO TRULY BELIEVED IN LOVE OF GOD—FAMILY AND HIS CHURCH AND LIVED TO THESE BELIEFS IN HIS WORDS AND ACTIONS. HE BLESSED THE LIVES OF ALL WHO KNEW HIM. ANNE MARIE AND I SHARED FOR OVER 60 YEARS THE JOYS HE BROUGHT TO HIS FAMILY AND FRIENDS. RALPH LIVED A LIFE OF SPIRITUAL DIGNITY BENEFITING FAMILY AND ALL THAT CAME TO KNOW HIM. HE WILL BE MISSED BUT REMEMBERED FOR HIS GOODNESS. Writing by Joe Salciccoli----his nephew. RALPH CONTI, MY MOTHER’S LITTLE BROTHER, OR UNCLE RALPH, HAS ALWAYS BEEN AN ICONIC ROLE MODEL TO ME. HE HAS BEEN MY OTHER FATHER WHO, THROUGHOUT MY LIFE, TAUGHT ME MANY IMPORTANT SKILLS, INTRODUCED ME TO NEW EXPERIENCES, AND ENCOURAGED AND GAVE ME GUIDANCE AT CRITICAL TIMES IN MY LIFE. FROM HIM I WAS EXPOSED TO WORKING IN CONSTRUCTION, HUNTING AND FISHING, GARDENING, WORKING ON A LATHE, AND CARVING IN WOOD. HE WAS A MAN OF MANY SKILLS AND INTERESTS AND HAD A LOVE FOR LEARNING NEW THINGS. HE WAS ALWAYS PATIENT WITH ME AND GENEROUS WITH HIS TIME TO TEACH ME NEW IDEAS AND INTRODUCE ME TO NEW EXPERIENCES. ONE STORY I HAVE ABOUT UNCLE RALPH OCCURRED IN 1973. I WAS NEWLY MARRIED AND AS LUCK WOULD HAVE IT, I WAS OFFERED 3 CAREER JOBS ON THE SAME DAY. ONE WAS FOR XEROX AS A TECHNICIAN, ONE AS A MECHANIC FOR VENSETTA GARAGE, AND ONE WITH FORD MOTOR CO. I WANTED TO GO TO VENSETTA BUT KAY, MY WIFE, CALLED UNCLE RALPH WHO SAW THE LONG TERM POTENTIAL OF FORD. AFTER A GOOD DISCUSSION, I TOOK HIS ADVICE AND AFTER A 30 YEAR SUCCESSFUL CAREER THERE ---- I HAVE NEVER HAD ANY REGRETS. MUCH OF WHAT I LEARNED FROM UNCLE RALPH, I PASSED ONTO MY TWO SONS. HE EMBODIED A MAN WHO WAS STRONG, KIND, HARD WORKING AND WHO MADE HIS FAMILY HIS PRIMARY FOCUS. I CELEBRATE HIS LIFE AS WELL LIVED, AND HIS INFLUENCE AND CONTRIBUTIONS TO ME AND MY FAMILY ARE STILL ALIVE AND WELL. REST IN PEACE UNCLE RALPH. LOVE, JOE ********************************************************** Writing by Judith Conti-----his daughter. DAD, I KNOW THAT YOU ALREADY KNOW HOW MUCH I LOVE AND RESPECT YOU. BUT I WANT TO SAY IT ONE MORE TIME. I HAVE ALWAYS LOVED YOU AND ALWAYS WILL LOVE YOU----- WITH ALL MY HEART. FOR YOU, I’VE DONE MY BEST. REST NOW, DAD. REST IN PEACE WITH MOM. SINCERELY, JUDY AND-------THANK YOU, GOD, FOR GIVING ME THIS PARTICULAR FATHER AND THIS PARTICULAR MOTHER. I COULDN’T HAVE ASKED FOR BETTER PARENTS! *********************************************************

The family of Ralph Conti Sr. created this Life Tributes page to make it easy to share your memories.