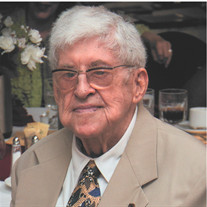 Philas J. Kelly Philas Kelly was born in the small hamlet of Amhic Harbor Ontario, July 30th, 1913 and passed away at age 105 on February 7, 2019. Philas spent his early years with his parents in Parry Sound. In 1923, his family moved to Detroit and settled in the Holy Trinity, Corktown area. Philas graduated from Southwestern High School in 1933. He was an outstanding distance runner and upon graduation was offered a track and field scholarship to the University of Detroit. He graduated from the University of Detroit in 1955. In 1935 Philas went to work for the Ford Motor Company in the steel mill at the Rouge Plant. While he started in manual labor, one of his greatest sources of pride was when he was called into his boss’s office and told he would never work manual labor again. In 1939, Philas was transferred to Ford’s general office in Dearborn. For the next several years he worked in accounting and during World War II he supervised a group handling military contract work. Following the war, Philas went into sales and marketing where he held a number of management positions, mostly related to marketing research and vehicle development. Philas would often say, one of his most interesting assignments was working in the upcoming Edsel division. In this role he was given the task of determining how many and where to locate Edsel dealerships. From 1937-40, Philas was a member of the Michigan National Guard 107th Reservation Squadron Photo Section. At the time of his passing, he was the oldest living member of the Guard and in 2016, he was awarded the Quilt of Valor. Philas was an avid, amateur photographer. In 1960 he joined the Photographic Society of America and was a life member and past president of the Photographic guild of Detroit. In 1963, he was instrumental in founding a weekend Photographic seminar that attracted hundreds of photographers. In 1982, Philas received the highest honor of “fellowship”in the Photographic Society of America for his accomplishments in nature and color photography. As an enthusiastic traveler, Philas toured many countries in Europe. One traveling highlight was a trip to the Arctic Circle. Every fall, for many decades, Philas traveled to his beloved Vermont to photograph fall color. Another great joy was attending Michigan State Football games. He held season tickets well into his 90’s. Philas loved people and enjoyed nothing more than telling a good story. He was devoted to his family and served as a wonderful role model for how to live life to the fullest and always show kindness and consideration to others. Philas was the dear husband of the late Olive Florence (Cory) and proud father of Judith (Ron Welch) Green. He was proud grandfather of Kelly (Richard) Thomas, Cory (Jason) Emery and the late Jeffery Lee Hood. His five great-grandchildren Edie, Eloise and Everett, Lynsey and Violet were his pride and joy. Philas was brother of the late Mary (Pete) Carpenter, Kathleen (Cid) Barker and Bristol Crowley. He was uncle to many nieces and nephews. In state at Our Lady of Sorrows Church, 23815 Power Road, Farmington, Wednesday February 13th from 10:30 am until funeral Liturgy at 11:00 am. Interment Holy Sepulchre Cemetery Donations can be made to the Holy Trinity School, 1050 Porter Street, Detroit, MI 48226 Click hereto donate or to the Sparrow Hospital Foundation, 1322 Michigan Avenue, Lansing, MI 48912 Click here to donate

Philas J. Kelly Philas Kelly was born in the small hamlet of Amhic Harbor Ontario, July 30th, 1913 and passed away at age 105 on February 7, 2019. Philas spent his early years with his parents in Parry Sound. In 1923, his family moved to Detroit... View Obituary & Service Information

The family of Philas Joseph Kelly created this Life Tributes page to make it easy to share your memories.

Philas J. Kelly
Philas Kelly was born in the small hamlet of...

Send flowers to the Kelly family.