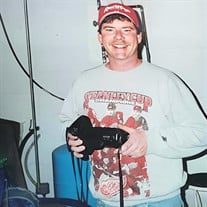 Paul John Moore, age 56, passed away on May 24th, after a difficult battle with cancer. He was born June 28th, 1965 in Dearborn, Michigan. In 1987, he married his first wife Dawn Moore and became a devoted father of two and husband. He married his second second ex wife Susan Mau who he spent the remainder of his life with. Dawn, Paul and Susan continued to love and raise their two sons John-Paul and Liam. Paul was the dedicated father of John Paul, and Liam (Elizabeth). The beloved brother of Brendan (Emily), Kevin, Anne-Marie (Thomas) and the late Stephen. The uncle of Sean (Heather), Heather (Chris), Kelly, Matthew, Jessica, Darren, Nichole, and the great uncle of TJ, Jr, Leanne, Liam, and the late Melanie. Paul was a loving, kind, big hearted person who was always there for the people he loved. Before his marriage to Dawn, Paul spent three years serving in the United States Army where he served mainly in Germany. He was not only an amazing father to his sons, he was the type of parent that always stepped up to be a hockey coach, baseball coach or Boy Scout leader and was never more than a phone call away whenever they needed help or advice. For many he was the best person to rely on and the one person who could always make you smile. His sense of humor lives on in the many sayings he repeated that stick in the minds of the ones he loved like “I’m dumb, not stupid” which he stated often to his sons. He could make friends in any room he walked into and will be deeply missed by anyone and everyone that ever had the pleasure of knowing or loving him. Cremation arrangements entrusted to the O’Brien/Sullivan Funeral Home 41555 Grand River Ave. Novi, MI 48375. Funeral service and Celebration of Life gathering are planned for Wednesday June 1st visitation at 4pm with a remembrance at 6pm. In lieu of flowers, please consider contributing a donation in his honor to the American Cancer Society

Paul John Moore, age 56, passed away on May 24th, after a difficult battle with cancer. He was born June 28th, 1965 in Dearborn, Michigan. In 1987, he married his first wife Dawn Moore and became a devoted father of two and husband. He married... View Obituary & Service Information

The family of Paul John Moore created this Life Tributes page to make it easy to share your memories.