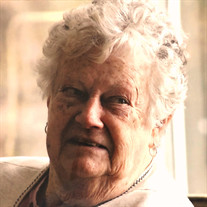 Patricia Ann Walters (Urban), 90, passed away on August 17, 2019, joining in eternity her husband Edward and son John. Patricia (Pat, Patsy, Patrish, Mom, Momsie, Grandma) was born in Detroit, Michigan on July 14, 1929 to Irene and Louis Urban and is survived by her sister, Nancy Stone (Urban). Her spirit carries on in her children and their spouses: Barbara (Larry), Joseph (Karen), David (Lori), Nancy (Dean) and Andrew (Elizabeth). There are also those who called her Grandma: Rebecca (David), Ann Marie (Mark, Miller, Quinn), Rick (Velvet), Louis, Claire, Chase, Daniel and James, as well as her grand-dogs, Lily, Gus, Bruno and Mazie. And not to be forgotten, nieces, nephews, friends and family too numerous to list, who were all treated to her love, shelter and infectious, joyful laughter. Pat spent the summers of her youth on Stag Island in Canada, hanging out at the sand dunes, mixing hi-balls with Canadian whiskey and dancing the night away at the island dance pavilion. She met Ed while they were both working for the City of Detroit, they married in 1951 and together they had six children. A talented artist, she put her charcoal and brushes down so that she could keep her children in-line. When they were not in-line, she still helped them out. After they grew up, Pat had enough energy remaining, and ambition, to attend Schoolcraft College, obtain a nursing degree and practice nursing, mostly at Botsford Hospital in Farmington. She was an active member of her community in Detroit where she joined the Altar Society at St. Eugene Parish, a bridge and bowling league, and every year registered people to vote. She always made some time to show her kids the summer fun at Stag Island. She and Ed retired to Cedar, Mich. where they made the most of a well-deserved retirement. They spent more than twenty five active years with friends and family playing golf, tennis and cards, laughing, relaxing and appreciating Leelanau County. Throughout her life Pat made friends easily. She was a great listener, she didn't judge, she was curious about the world and she was, for the most, part open-minded, just not about the fact that her kids did not have a cold, they had an allergy. Pat also enjoyed quiet moments reading mysteries, completing NY Times crossword puzzles, and watching movies with her favorite snacks: Coke and buttered popcorn. She loved catalog shopping and was prone to buying the latest, newest kitchen gadget, sometimes buying one for her kids as well. Most of theirs sit idle in the back of kitchen drawers because they still can't figure out what they are used for. Her grandchildren used her as the first Siri, calling her to fact-check their parents every chance they could, earning her the title ‘the smartest woman in the world’ as she often informed the grandchildren that their parents were, indeed incorrect. She had a unique ability to know grandchildren as individuals, and listen and talk to them patiently and with an unpatronizing voice. It probably helped that she loved to giggle when reading to them. She is adored. Pat was a star in all her roles and in recent decades an especially bright star as wife and grandmother. She showed us what dedication and love for family is all about when she cared for Ed as he declined late in life. This example is one of her greatest legacies. A celebration of her life will be held for family and friends at a later date. We request memorials be directed to: Friends of the Leland Library, Box 736, Leland MI 49654. Expressions of sympathy www.obriensullivanfuneralhome.com

The family of Patricia Ann Walters created this Life Tributes page to make it easy to share your memories.

Send flowers to the Walters family.