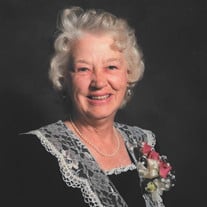 Patricia “Tish” Harmon, age 94, passed away peacefully on Monday, December 2, 2019. She was the beloved wife of the late Edward J. Harmon and dear mother of George (Judith), Maureen (Michael) Hagerty, Patrick (Nancy), Susan (Michael) McKiernan, Martina (Daniel) Ezekiel, Matthew (Cindy), Sheila (David) Stock, and Thomas (Kathleen). Tish was the proud grandmother of Emily, Tim, Adrian, Conor, Matthew, Bridget, Mark, Claire, Michael, William, Lewis, Elaine, Brendan, Aidan, Patrick, Isabel, Edward, Eric, and Shannon.. She also had seven great grandchildren. She was the sister of Jean Wholihan, and the late Robert Lannen, Aileen Mueller, Kathleen Barlum, and Sister Sally Lannen. Tish Harmon was born on May 31, 1925, and lived most of her life in Detroit. She was one of six children. She was baptized, confirmed, married and now will be buried at St. Mary’s of Redford, in Detroit. She graduated from Marygrove College and worked as a Medical Technician. In 1950 she married the love of her life, Ed Harmon, and went on to raise 8 children. Tish had a lively sense of humor and wit. She traveled the world and made many friends. She lived a long, adventurous and faithful life. We will remember her lovingly and miss her dearly. Visitation on Friday, December 6 at the O’Brien - Sullivan Funeral Home, 41555 Grand River Ave. Novi, from 2 p.m. until 8 p.m. with a rosary at 7:30 p.m.: In state at St. Mary’s of Redford Catholic Church 16098 Grand River Ave. Detroit, MI 48227 Saturday December 7, at 9:30am until the funeral Liturgy which will be held to honor her life at 10 a.m. In lieu of flowers, donations can be made in her honor to: Angela Hospice Home Care 14100 Newburgh Rd. Livonia, MI 48154 www.angelahospice.org World Medical Relief 21725 Melrose Southfield, MI 48075 www.worldmedicalrelief.org/

The family of Patricia C. Harmon created this Life Tributes page to make it easy to share your memories.

Send flowers to the Harmon family.