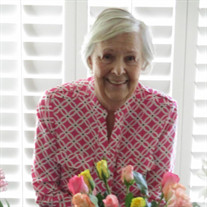 Patricia Jean Hanish (nee Carpenter), age 94, passed away peacefully on April 11, 2022, at the Angela Hospice Care facility in Livonia, MI, with her loving husband and son Paul by her side during her final days. She was born on April 25, 1927, to Stanley and Jennie (nee Tekla Dmuchowski) Carpenter in Detroit, MI. Patricia is preceded in death by her daughter, Denise (Ron) Fiedler, twin brother Stanley Carpenter, older brother Robert Carpenter and former spouse Don Damon. Pat is survived by her devoted husband of 50 years, Joseph. She is also survived by her son Paul (Josie) Damon, son-in-law Ron Fiedler, five grandchildren – Lauren (Colin) Kane, Allison (Ben) Cummings, Brandon (Jackie) Damon, Kristen Fiedler, and Marissa (Dave) Meinema, five great-grandchildren and many nieces and nephews. Pat was a graduate of St. Theresa High School in Detroit. She began her working career in insurance, and after gaining financial acumen there, moved on to D&C Heating and Plumbing in Ann Arbor, MI; Harper College in Palatine, IL; and then back to Ann Arbor, MI working for the University of Michigan until her retirement. Pat had two children from her previous marriage, Paul and Denise. She married Joe Hanish in 1971, and they just recently celebrated their 50th wedding anniversary. She was affectionately known as “Grandma Butterfly” by her grandchildren and great-grandchildren. As you would guess by her nickname, she genuinely enjoyed butterflies. But unknown to many – she was quite the formidable opponent in Dominos. Pat was also a voracious reader, often going through as many as three books in one week (mysteries were always a favorite). And just to keep life a bit more interesting, she would start each day with a crossword puzzle. While Pat loved life, her family was the heart of her world; she was fiercely loyal to them and was individually each of their biggest fan. She cherished the time she had with them and made a practice of sending out greeting cards as a remembrance, celebrating their achievements and milestones. Our love for her will live on in the many memories she gave us. Her memorial service will be on April 29, 2022, at ST. MARY’S CHURCH, 1955 Commerce St., Milford, MI beginning with a gathering in the Vestibule at 10:00 am and moving directly to mass at 11:00 am. Monsignor John Budde will preside. https://www.stmarymilfordmi.org/ One of Pat’s missions was to distribute healing prayer cards to those suffering from life’s maladies. It is one that has caught on in our community, and we ask those that read this to continue the practice. In that spirit, we also suggest that in lieu of flowers, donations be given in Pat’s name to the American Cancer Society or Angela Hospice

Patricia Jean Hanish (nee Carpenter), age 94, passed away peacefully on April 11, 2022, at the Angela Hospice Care facility in Livonia, MI, with her loving husband and son Paul by her side during her final days. She was born on April 25, 1927,... View Obituary & Service Information

The family of Patricia J. Hanish created this Life Tributes page to make it easy to share your memories.