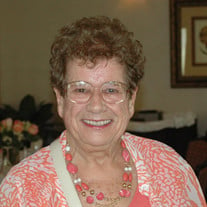 Arim, Norma “Mickey” September 9, 2019, Age 99. Norma was born June 2, 1920 in Detroit, Michigan to the late William and Lauretta Haase. She was the beloved wife of the late Maurice “Maury”. Maurice and Norma were married October 19, 1946 at the Cathedral of the Most Blessed Sacrament and celebrated 62 years together until his death on December 19, 2008. They were dedicated to raising their four children to love and pursue learning; all earned college degrees. They loved to travel locally and internationally. Norma was the loving mother of Barbara (Thomas) Wagner, Elizabeth (Stephen) Palms, William (Kristin) Arim and Robert (Carolin Wilhelm-Arim) Arim. Grandmother of Laura (Aaron Keller) Wagner, Katherine (William Dean) Palms, Kevin (Julia) Palms, Jeffrey (Sophie Heuschling) Palms, Matthew (Jill) Arim, Kendra Arim and Sophia Arim. Great grandmother of Isobel, Benjamin and Olivia. Preceded in death by her siblings, Miles George Haase, Alton William Haase and Muriel Helen Morrissey. Norma was the first in her generation to go to college. She attended Highland Park High School and Junior College and received her Bachelor of Arts degree in 1943 from Wayne State University. She was among the top three in her graduating class and was awarded her first teaching job at Doty Elementary. Norma taught in the Detroit Public Schools from 1943-1992. She was a 1st, 2nd and 3rd grade teacher at Doty, DuBois, Vernor, Clippert, Columbian, McGraw and Herman elementary schools. Norma set high goals for herself and achieved them. Upon retirement in 1992 she received a letter from the Detroit City Council thanking her for her years as a professional educator. Reading was her lifelong passion and one of her greatest joys was teaching her students to read. Visitation 2-8 pm Friday, September 13, 2019 at the O’Brien/Sullivan Funeral Home 41555 Grand River Ave, Novi, MI 248-348-1800 with a scripture service at 7pm. In-state 10:30 am Saturday, September 14, 2019 at Holy Family Catholic Church 24505 Meadowbrook Rd. in Novi until the funeral Mass at 11 am. Internment at Holy Sepulchre Cemetery, Southfield. Memorial contributions may be directed to the Detroit Public Schools Foundation www.DPSFDN.org for Literacy and Early Childhood Education. Please indicate that the donation is in memory of Norma Arim. The family is also establishing an endowed fund of the Community Foundation for Southeast Michigan in memory of Norma Arim to support elementary education literacy programs in the Detroit Public Schools. To make a contribution, please make your check payable to “Community Foundation for Southeast Michigan” or “CFSEM”, note in the memo line “Norma Arim” and mail to Community Foundation for Southeast Michigan, 333 W. Fort Street, Suite 2010, Detroit, MI 48226. Expressions of sympathy www.obriensullivanfuneralhome.com

The family of Norma "Mickey" Arim created this Life Tributes page to make it easy to share your memories.

Send flowers to the Arim family.