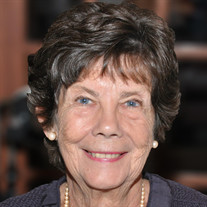 Norine Mae Murphy Went to be with the Lord August 31, 2019. She passed away peacefully in the loving arms of her devoted daughter Leslie. Norine Hawkins was born on December 1, 1938 to Harry and Winifred, the first born of their three children. She graduated from Bentley High School in Livonia, and soon after, on June 15, 1957, she married David. She remained his loving wife for the next 50 years. Norine devoted herself to her family, first to raising her own four children, and later, to loving and delighting in her grandchildren and great-grandchildren. Norine found joy in nearly all areas of her life, and the root of that joy came from her deep and abiding faith, which manifested itself in everything she did and was evident to anyone who knew her. She enjoyed her work at Observer Newspapers for 16 years, as well as trips to Las Vegas and spending autumns and winters in the warmth of Florida. Mostly, she loved the time she spent with her family, whether here or during 4th of July holidays at the cottage in Interlochen or at Murphy Family Camp Dearborn week. Norine will be dearly missed for so many things that made her special: her warmth and kindness, her beautiful smile, her terrific sense of humor, her great listening skills and her complete lack of pretense. But her greatest legacy is the love she showed to all who knew her. Cherished mother of Leslie (Mark) Churella, David (Tami) Murphy, John (Sue) Murphy, Melissa (the late Thomas) Maher. Loving grandmother of Mark, Jr. (Amy) Churella, Ryan (Danielle) Churella, Josh (Carlee) Churella, Dayna (Clay) Hanebrink, David Murphy (Robbie Collis), Patrick Murphy, Olivia (Jared) Grubke, Joseph Murphy, Colin Murphy, Lara Murphy, McKenzie Maher and Brady Maher. Loving great-grandmother of Jacob, Lola, Cruz, Ryker, and Penelope Churella, and Payton and Skylar Hanebrink. Adored sister of Jackie Brennan and the late John (Dale) Hawkins. Also leaves many nieces and nephews. Visitation Thursday, September 5, 3-8pm at O'Brien-Sullivan Funeral 41555 Grand River Ave, Novi. Rosary at 7:30 PM. In state Friday September 6 10:30am until 11am Funeral Mass at Holy Family Catholic Church 24505 Meadowbrook Rd., Novi. In lieu of flowers a contribution can be made to the University of Michigan Rogel Cancer Center - https://www.rogelcancercenter.org/giving/

Norine Mae Murphy Went to be with the Lord August 31, 2019. She passed away peacefully in the loving arms of her devoted daughter Leslie. Norine Hawkins was born on December 1, 1938 to Harry and Winifred, the first born of their three children. She... View Obituary & Service Information

The family of Norine Mae Murphy created this Life Tributes page to make it easy to share your memories.

Send flowers to the Murphy family.