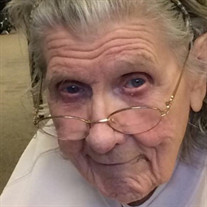 Hubberth, Melva Naomi (Whitener) died peacefully at the age of 90 on November 7, 2018, two weeks shy of her 91st birthday. She was born November 25, 1927 in Buckhorn, Missouri as the middle child of 7 to Lessie and Sydney Whitener. Her siblings Paul, Florence, Roy, Norma Jean, Harry and Kathryn. Melva was active with many friends and enjoyed sewing, knitting, crocheting, baking and was a Girl Scout Leader. She worked for the USO and met her husband, Clayton, “Nick” Hubberth there. She followed Nick to Washington, D.C. where he was stationed and she worked for the Navy. They married April 10, 1955 in Arlington, Virginia and headed to Nurnberg, Germany where Nick was to be stationed. They had twin boys while in Germany, Neil and Norman. After 3 years they went back to the United States and eventually settled in Warren, MI. Melva grew up on a farm, so she always had a good vegetable garden. They had a lot of fruit trees so she did a lot of baking and canning. Her family loved her Christmas wreath coffee cakes. She would bake many for Nick’s work where they would ask for them each year. Melva loved kids and worked many years as a Lunch Aid at Roosevelt Elementary School in Warren . She went on to work as Assistant Cook at Kelly Junior High in East Detroit (now Eastpointe) where she eventually retired from. In her recent years, her pride and joy was anything to do with Joseph her grandson-it kept her going. Melva and Nick were married for 29 years when Nick passed away in 1984. Melva is survived by her sons, Neil and wife Janice and their son Joseph, and Norman and wife Gloria, her brother Harry Whitener and nieces and nephews. Funeral service Sunday, November 11, 2018 at 6pm from the O’Brien/Sullivan Funeral Home 41555 Grand River Novi 248 348 1800 with visitation Sunday from 3pm until 7pm. Interment White Chapel Cemetery, Troy, MI. Expressions of sympathy www.obriensullivanfuneralhome.com

Hubberth, Melva Naomi (Whitener) died peacefully at the age of 90 on November 7, 2018, two weeks shy of her 91st birthday. She was born November 25, 1927 in Buckhorn, Missouri as the middle child of 7 to Lessie and Sydney Whitener. Her... View Obituary & Service Information

The family of Melva Naomi Hubberth created this Life Tributes page to make it easy to share your memories.

Hubberth, Melva Naomi (Whitener) died peacefully at the age of...

Send flowers to the Hubberth family.