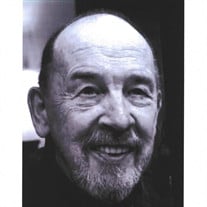 Melbourne G. Bork - Age 88 (died June 15, 2021) Northville, MI Born March 4,1933 to the late William J. Bork and Mary Ann (Mae) Maike in Detroit, Michigan in the shadow of St. Elizabeth Catholic Church. He is the brother of the late Ronald (late Clare), Muriel Peddie (Jack), and the late Harvey (Fmr. late Rose and Ruby). Former husband of the late Mary Ellen Bork (Mondro), the late Jeanne Bork, and longtime companion of the late Miriam Furci. ​Beloved father of Dr. Michael Bork (Fiona), Mary Beth Yakima (Daniel), David Bork (David Bellamy, Jr.), Gary Bork (Kimberly), and Julie Parks (William). Father-in-law of the late Cynthia L. Bork. Loving grandfather of Elizabeth (Mayon) Bork, Michael (Nicole) Bork, Amy Yakima, Emma Yakima, Margaret Parks, Caroline (Brian) Lamb, and Lauren Yakima. Proud great-grandfather of Hannibal Lamb. Step-grandfather of William J. Parks, Kandus Lee, and Kory Hogan. Mel grew up on MacDougal Street in Detroit. He played on many sports teams, which included baseball and basketball. After graduating from St. Joseph High School in Detroit, he enlisted in the US Army in 1953 and was stationed in Germany. He received the National Defense Service Medal (Korea) and the Army of Occupation Medal (Germany). He coached intramural basketball at Our Lady of Grace in Dearborn Hgts, MI, when his children were growing up. Mel worked for Michigan Consolidated Gas company as an accountant before moving on to Parke-Davis as a financial analyst in Detroit. He moved to Rochester when the company became Pfizer Pharmaceuticals. He retired at 60 years old. ​Mel enjoyed his retirement life for 28 years. He loved to go for long drives to visit old friends and new places, explore flea markets, visit the casinos, and get in as many rounds of golf as possible. He spent many a winter in Bradenton, Florida with his long-time companion, Miriam. He moved to Traverse City for several years before heading back south and settling in Northville, MI. Mel was charming and friendly. He loved his grandchildren and was proud of every one of them. He was known to say, “Who loves ya, baby!” when they were leaving after visiting. “SITUATION” and “END RESULT” … words that drove us crazy, but now will be remembered fondly when we hear them. He was deeply loved and he will be missed!!! Auf Wiedersehen!!! We love you, Dad!💔 Private services will be held. Expressions of sympathy www.obriensullivanfuneralhome.com

The family of Melbourne "Mel" Bork created this Life Tributes page to make it easy to share your memories.

Send flowers to the Bork family.