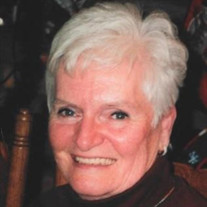 MAUREEN ANN (FUGELSANG) HARAN – Maureen Ann Haran, age 79, born in Mineola, NY, on January 24, 1942, passed away peacefully with family by her side at her son’s home in Linden, MI, on May 5, 2021. Maureen grew up in Floral Park, NY, and attended high school at Our Lady of Wisdom Academy. A couple of years after graduation, she met the love of her life, Gerald “Gerry” Haran, and they were united in Holy Matrimony on November 17, 1962. In 1965, Maureen and Gerry welcomed their first of five boys in the span of seven years. Maureen had her hands full raising the boys, first in Farmingdale (on Long Island), and later in Monroe, NY. As the family grew, she enjoyed bowling and “kibitzing” with the neighborhood wives on High Ridge Road. She was a peacemaker in what could, at times, be a chaotic household. She reminded the boys to treat their brothers well and stick up for each other, but also be empathetic because they never knew what others were going through. The boys remember she would sometimes let them stay home from school on their birthdays and take them to shop for toys. When they got older, she went to stenography school at night. The instructors told her class that many would not achieve certification, but she persisted, succeeded and began a career in court reporting. With Gerry’s job transfer to Detroit in 1981, Maureen began recording depositions in the metro area. She was a member of the National Court Reporters Association and served a short time with the Federal Grand Jury in Detroit. One notable “job” of hers in the Grand Jury was the John DeLorean cocaine-conspiracy case in the early 80’s. She later became the household breadwinner and put the boys through Catholic school at St. Agatha in Redford. Maureen loved watching her sons’ sports events and then her grandkids’ events. Demonstrably proud of her boys, their wives, and their families, she beamed at their accomplishments, but was modest when it came to her own. She was self-deprecating and quick to laugh at herself, especially after rattling off incorrect names of her boys or grandkids – a regular occurrence! All agree she was her happiest at family gatherings, playing games and making memories. Her laugh was infectious, and she laughed as hard at the last telling of a family story as she did at the first. Maureen was preceded in death by her husband of 56 years, Gerald Haran; her parents, Genevieve and Edward Fugelsang; step mother Florence Fugelsang; brother Edward Fugelsang; and sister Jean (Fugelsang) Moll. She is survived by her brother William Fugelsang and (5) sons Douglas (Lisa), Patrick (Karen Lee), Andrew (Holly), Matthew (Leah) and Edward (Karen). She has left many fond memories with her (12) grandchildren: Taylor, Allyson, Thomas, Bailey, William, Hayden, Noah, Mark, Luke, Kevin, Paul and Sierra, and numerous nieces and nephews. A viewing will be held 2 – 8 p.m. on Wednesday, May 12, at O’Brien-Sullivan Funeral Home (41555 Grand River, Novi); the funeral will be held at 10:30 a.m. on Thursday, May 13, at the Church of the Holy Family (24505 Meadowbrook, Novi). To be directed to a live stream recording of Maureen's funeral liturgy please click here In lieu of flowers, the family requests that you consider donating to the American Cancer Society (cancer.org).

The family of Maureen A. Haran created this Life Tributes page to make it easy to share your memories.

Send flowers to the Haran family.