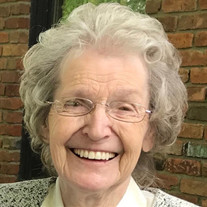 Mary Camilla MacDonell Pfeffer passed away peacefully Monday evening February 18, 2019 surrounded by her loving family. She was born October 11, 1931 in Detroit, Michigan, the fourth of five children to Alexander Camillus and Margaret Eloise (Armstrong) MacDonell. Mary Camilla graduated from St. Mary’s Academy in Windsor, Ontario where she and her sisters were student boarders. As an assistant to two doctors, she worked in the Fisher Building in Detroit while she was dating the love of her life, Dean Pfeffer. They married in May of 1951 and soon after began their family. Together they raised their six children: Suzanne (Thomas) Goldsmith, Katherine (Jack) Pross, Robert (Wendy) Pfeffer, Daniel (Michele) Pfeffer, Doni (Kris) Houghtaling and Jacqueline (Craig) Hyde. Dean and Camilla began their life together in a small apartment on “11 West Margaret” until they bought their first home on Heyden Street in Detroit. After 17 years, they moved to New Hudson to a home they built on their “farm.” They also enjoyed many trips to Traverse City, which they considered their favorite place in the world. Camilla was Dean’s “best friend” and soulmate. She was shy, sweet, and beautiful with her long brown ponytail. She worked tirelessly beside Dean “keeping the books” for Dean’s Twin Pines milk route business and later, behind the scenes, ran their picture framing business, Meadowbrook Art Center. Camilla found great joy in her children, grandchildren, and great-grandchildren and was always considered the family’s “commander-in-chief.” For many years, her hobby was building dollhouses where her artistic talent shined. Having survived many health scares, her love and devotion to her family always kept her strong for her husband and children. In addition to her loving husband of 67½ years and her children, she is survived by 17 grandchildren: Sean, Colin, Meghan, Rick, Katie, Tim, Mary, Scott, Karly, Alanna, Peter, Adrianna, Kristin, Mitchell, Eric, Kevin, Aidan and six great grandchildren: Hunter, Connor, Lucy, Claire, Vincent and Antonia. She is also survived by her brother Kevin MacDonell, her sister Margaret Lisuzzo, her brother-in-law Gary (Patricia) Pfeffer, her sister-in-law Gail Delp, and 22 nieces and nephews. She was preceded in death by her brother and sister-in-law Donald and Theresa MacDonell, her sister and brother-in-law Ann and Jim Lisuzzo, a sister-in-law, Wanda MacDonell, a brother-in-law, William Lisuzzo and her granddaughter Katie Chouinard. Visitation will be held at O’Brien-Sullivan Funeral Home, 41555 Grand River Ave., Novi, MI on Sunday, February 24, 2019 from 2:00pm to 7:00pm. where a scripture vigil will be held at 6:00pm. Mass of Christian Burial will be celebrated at St. Joseph Catholic Church, 830 S. Lafayette St., South Lyon, MI on Monday, February 25 at 11:00am with Fr. Stan Tokarski as celebrant. She will lie in state at the church from 10:30am until the time of service. Burial will follow at 2:30pm in Holy Sepulchre Catholic Cemetery, 25800 W. 10 Mile Rd., Southfield, MI. In lieu of flowers, contributions may be made to Meals on Wheels Livingston and Oakland County, MI 9525 E. Highland Rd., Howell, MI 48843 or the National Shrine of St. Jude Claretian Missionaries 3200 E. 91st. Street, Chicago, Illinois 60617.

The family of Mary Camilla Pfeffer created this Life Tributes page to make it easy to share your memories.