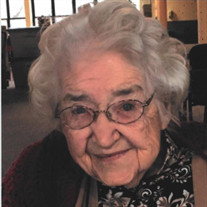 Mary (Cooke) McGraw, age 101 of Westlake, OH died Monday, January 4, 2021 at the Lutheran Home after a short illness. Mary, the daughter of Henry & Catherine (McEvoy) Cooke, was born on August 23, 1919 in Wigan, Lancashire England. On October 23, 1923 Mary, along with her mother Catherine and sisters Anne & Philomena, boarded a ship and travelled to America. They joined Henry in Chicago, who came before them looking for work. After 4 months in America, the homesick Catherine and her 3 daughters returned to Wigan. Five months later, Catherine and her 3 daughters returned to America, and reunited with Henry, now in Scranton, PA. Eventually, they settled in Highland Park, MI. Mary graduated from St. Benedict High School in 1937. Upon graduation, she worked in the cash office at Kern’s Department Store; and then for the Internal Revenue Service in Detroit, MI, where a co-worker introduced Mary to her brother Ambrose (Andy) McGraw. It was a match made in Heaven. They fell in love, and were married on February 22, 1944. Eventually, they settled in Detroit, MI and had 3 children, Kathy, Kevin & Colleen. Mary was a charter member of St. Gemma Catholic Church, and an active member of the St. Therese Guild. She was also a long-time member of the Gemma Guild at St. Paul of the Cross Retreat House. Mary was a Girl Scout Troop Leader for Kathy’s troop and Den Mother for Kevin’s Cub Scout Pack. Mary was active in all 3 of her children’s high schools as a member of the Mother’s clubs. After her children were grown, Mary worked in the mailroom at Mercy College in Detroit, MI. In 1981, her mother Catherine moved in with Mary and Andy. Then in 1987, the three of them moved to Colonial Acres in South Lyon, MI where they made new friends, and enjoyed their new community as members of St. Joseph Catholic Church. Catherine died in 1994, and Andy in 1997. Mary remained active, but moved to the Lutheran Home in Westlake, OH in 2016, to live near Kevin and Barb. Mary enjoyed all the new activities there, including the Concordettes choral group and the Concord Reserve Players drama group. Mary is survived by her 3 children, Kathy (Lee) Liston, Kevin (Barbara) McGraw, Colleen (Jeffrey) Kebblish. Mary is also survived by her only granddaughter, Kristen (Casey) Fowler, and 2 great granddaughters, Kaitlyn and Hannah Fowler; and many nieces and nephews. Mary was predeceased by her parents Henry and Catherine, her husband Andy, her sisters Sr. Anne Cooke CSJ, Philomena (Frank) Torma, Theresa (Leonard) Lewalski; and her brothers Vincent (Shirley) Cooke and Francis (Helen) Cooke. Mary was the last surviving member of her generation in her family. A relative commented that “It’s like closing an amazing history book that no one wants to close.” No flowers please. Donations may be made in memory of Mary McGraw to the Congregation of St. Joseph (Sisters Retirement) 2929 Nazareth Road, Kalamazoo, MI 49048; or to the Lutheran Home (Resident Activities) 2116 Dover Center Road, Westlake, OH 44145. Due to the Covid virus, the family will be having a private mass. Burial will take place at Holy Sepulchre Catholic Cemetery, Southfield. A Memorial Celebration of Mary’s life will be held at a later date.