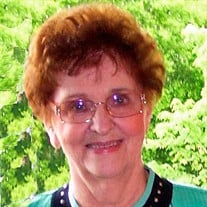 Mary Ellen (Rotz) Derrig With profound sadness we announce the passing of Mary Ellen Derrig, our devoted mother, grandmother, great grandmother, and friend to all whose lives she touched on July 13, 2019. She was proceeded by her loving husband, Michael “Jack” Derrig whom she was married to for 60 years. She met Jack in 1952 at a local Irish dance and was married on September 5, 1953 at St. Boniface Catholic Church in Detroit. Mary Ellen and Jack proudly raised six children: Michael (Sharon), Stephen (Kathy), the late Ellen (Pat) Teschendorf, Gerald (Sandy), Bridget (John) Hines and Patrick. Mary Ellen’s life was her family and she was also a very proud grandmother of fourteen grandchildren: Amanda (Randy) Hill, Heather (Wes) Berlin, Andrew Teschendorf, Christopher (Elisa), Timothy (Jenna), Allison, Meghan Muladore, Jacob (Whitney), Lauren, Jacquelynn, John (Ashley), Erin, Sean and Marie Hines. In addition, she was a joyful great-grandmother of eight grandchildren: Emily and Sara Hill, Owen and Agnes Derrig, Olivia and Liam Muladore, Claire Berlin and Lydia Derrig. Mary Ellen was equally very proud to be a graduate of St. Vincent High School in Detroit. Many of her classmates became her lifelong friends. After high school she worked in various positions with a number of employers which included US Treasury Department in Detroit. Mary Ellen was very proud of her Irish roots and loved Irish music which was heard in her home. Her mother who died giving birth to her hailed from Ferns, County Wexford, Ireland who immigrated with her best friend Mary Keane from Ballymoe, County Roscommon Ireland who lovingly raised her as her own. She was also proud of her German heritage, her late German father was born in Saskatoon Ontario, Canada. Mary Ellen is survived by her brother Fred Rotz. To share and celebrate the beauty and love of Ireland she co-founded with her husband Irish Imports, which was filled with just about everything from Ireland. Mary Ellen enjoyed baking and began baking Irish Soda Bread which quickly became a favorite at the store. That quickly led to the creation of a new business, The Irish Baker. Over the years, she gave away her award-winning Irish Soda Bread and Tea Scones to anyone or charity in need, especially when children were involved. Other passions she had was her love of gardening, especially flowers and interacting with the birds who seemed to always surround her. She would always make sure that there was ample bird seed or any old bread made it to her back yard to feed these birds. She also enjoyed playing cards, especially with her family, she was quite the card shark too. In addition, Mary Ellen also enjoyed bowling on a sanctioned league where she managed to bowl a perfect game with a score of 300. Her favorite activity above all else was attending bible study classes. She truly loved learning about her Catholic faith and hands down was the best possible loyal servant to her beloved universal church. Visitation will be at the O’Brien-Sullivan Funeral Home, 41555 Grand River in Novi on Thursday, July 18 from 2-8 PM with a Rosary in the evening. She will lie in state at St. Patrick Catholic Church, 711 Rickett Road, Brighton, Friday, July 19 at 9:30 AM until the start of Mass at 10:30 AM. Burial will be at St. Patrick Calvary Cemetery in Brighton. Flowers are welcomed or memorial condolences may be expressed in Mary Ellen’s name to Click here to contribute

Mary Ellen (Rotz) Derrig With profound sadness we announce the passing of Mary Ellen Derrig, our devoted mother, grandmother, great grandmother, and friend to all whose lives she touched on July 13, 2019. She was proceeded by her loving husband,... View Obituary & Service Information

The family of Mary Ellen Derrig created this Life Tributes page to make it easy to share your memories.

With profound sadness we announce the...

Send flowers to the Derrig family.