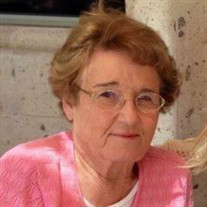 Mary Anne McDonnell (Keating), Age 92, passed peacefully into eternal life with God on October 19, 2021. Mary Anne was born March 8, 1929 in Detroit, MI to Edward & Marion Keating. Mary Anne’s life centered around Faith and Family. She touched so many lives and was dedicated to serving God and His family. Mary Anne is survived by her five children: Michael McDonnell and wife Cathy, Kathleen Damiani, Jules Damiani, Maureen Tyler and husband Brian, Sheila McDonnell, Sharon Henry and husband Don. She leaves behind 9 grandchildren: Ryan McDonnell, Sean McDonnell, Kelley McKenna and husband Michael, Molly Tyler, Katie Tyler, Laura Tyler, Rebecca McKevitz, Nicolette McDonnell and Kyle Sample. She is also survived by her brother Terrance Keating and wife Noreen and their two sons Kevin Keating and wife Karen and Patrick Keating. Her niece and nephews: Dan Roehl and wife Margie, Tom Roehl and wife Ellen, sons Justin & Ben and Patrice Roehl. She was predeceased by her loving husband Bruce, sisters Rosemarie and husband Jack, Noreen Smith and baby Joan Michael. Nephew: John Roehl. Mary Anne was a trail blazer as the first of 5 children. Growing up in the Gesu parish she graduated in the first class at Mercy High School and then graduated with a Bachelor of Social Work degree from the University of Detroit. She married Charles “Bruce” McDonnell January 1, 1956 in a double wedding with her sister Rosemarie and Bruce’s best friend Jack Roehl. In addition to raising five children, Mary Anne was a Social Worker at Catholic Charities working with unwed mothers. Very active in her faith she was on Parish Councils, a Eucharistic Minister and took Communion to the sick at Providence hospital. She was given the Distinguished Service Award from the Daughters of Charity, the highest award given to a lay person. She was not ready for retirement and worked part time for O’Brien-Sullivan Funeral home and did volunteer work at the Providence Cancer Center. Mary Anne and Bruce escaped the winters by traveling to Gulf Shores, Alabama where she continued to volunteer and enjoy her walks on the beach. Mary Anne’s family will be present to receive friends Thursday, October 28, 2021 from 3:00 PM until 8:00 PM with a Vigil service starting at 7:00 PM at O’Brien-Sullivan Funeral Home, 41555 Grand River Ave., Novi, MI 48375. The funeral will be held at St. James Catholic Church, 46325 W. 10 Mile Rd., Novi, MI 48374 starting with a Viewing at 10:00 AM and Mass at 10:30 AM. Mary Anne will be laid to rest at Glen Eden Memorial Park. In lieu of flowers, a donation can be made to Catholic Charities or Daughters of Charity.

The family of Mary Anne McDonnell created this Life Tributes page to make it easy to share your memories.

Send flowers to the McDonnell family.