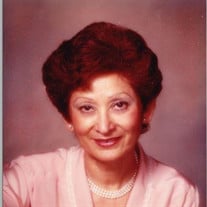 Margalida Arbulu Age 93 November 12, 2019 Beloved mother of Agustin V. Arbulu ( Marcia), Victor A. Arbulu, and Maria A. Arbulu ( Moses Saybe) Grandmother to Sarah Arbulu Hinkle, Victor Arbulu Jr.(Ebony Jones), Agustin (Tre) Arbulu, Cheyenne Arbulu-Pelletier and Lucas Arbulu Great-grandmother to Jacob Hinkle, Lillian Hinkle, Joseph Hinkle, Cheyenne Arbulu-Barrow, Sydney Davis, Victor A. Arbulu III ( Baby Vic). She is presided in death by her brothers Efrian Casalino Olga Casalino, Gaston Casalino, Violeta Casalino, Blanca Casalino, Victor Casalino, she leaves behind her brothers Carlos Casilino, Antonio Casalino and Juan Casalino Margalida, was a full time school teacher and working mother in Lima, Peru prior to coming to the United States. She helped put her former husband Dr. Agustin Arbulu through the university and medical school. The family eventually relocated to the Detroit area as she became a stay at home Mom raising her three children in Michigan. Once her children were in college she returned to obtain her teaching certification from the Wayne State University and worked part-time teaching Spanish to elementary children in Detroit for a number of years before retiring. For the next 15 years, she served as avid volunteer for multiple charities, took up golfing, enjoyed working as a seamstress to her grandchildren, became master gardener and continued to mentor a number of friends from Peru who lived in Michigan. She became a naturalized U.S. citizen later in life. During all her years in the U.S., she assisted her children, grandchildren as well as her brothers and sisters living in Peru. We love you and you will forever be in our hearts. A bilingual funeral mass will take place at Church of the Holy Family, 24505 Meadowbrook Road, Novi, Michigan 48375 at 11:00 a.m., on Saturday, December 28, 2019. In lieu of flowers she requested prior to her passing that donations be made to Margalida’s favorite non-profit agency, the Greater Detroit Agency for Blind and Visually Impaired, 16625 Grand River, Detroit, Michigan 48227 - https://gdabvi.org/donate

The family of Margalida A. Arbulu created this Life Tributes page to make it easy to share your memories.

Send flowers to the Arbulu family.