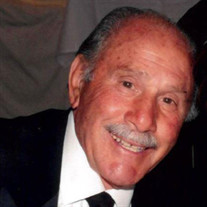 Not sure what to send?

Lirio Angelosante, a successful business owner, avid golfer, skier and storyteller known to friends as Larry, passed away March 6, 2022, at home in Naples, Florida. He was born in Ovindoli AQ, Italy, and came to the United States in June 1938 with his parents Croce, Luisa (Rossi) Angelosante and his older brother, Talentino. Lirio was always proud that his parents not only brought him to the U.S. when they did but also that they saved enough money to bring the family to their new home ‘in style’ – in a state room aboard the Italian ocean liner S.S. Rex. Lirio’s name is inscribed on the American Immigrant Wall of Honor on Ellis Island. Lirio grew up in Detroit and graduated Southwestern High School and Wayne State University Business College. In 1952, he married his beloved Beverly Ann Feder. He loved to tell the family that he bought Beverly’s engagement ring with money he earned from a paper route he worked beginning at the age of ten. Married 57 years, ‘Bev’ and ‘Larry’ spent most of their working life in Michigan: Wyandotte, Redford Township, Livonia, West Bloomfield and Farmington Hills. After retirement, they spent summers at their home at Shanty Creek Resort, in Bellaire, Michigan, and winters on Marco Island, Florida. Beverly passed in 2010 after a long battle with breast cancer. In 2011, Larry met Patty Gomez and they enjoyed a decade-long, loving relationship in Naples, Florida. Larry lived the American dream, building his own successful business. He began his career as an accountant supervisor for Marathon Oil Co. (then the Ohio Oil Co. and later Speedway Oil) in Findlay, Ohio. In 1964, Larry was asked by his father-in-law, Mortimer Feder, to help with his growing printing business, Michigan Rotary Press later renamed Keystone Printing Co. in Detroit. The printing business became Larry’s career. In 1974, Larry opened his own printing company, T.A.S. Graphic Communications in Detroit. At its peak, T.A.S. had approximately 266 employees and was the only printing company in the state of Michigan with a diverse range of equipment; from cold-set to heat-set. His 8-unit Hantscho heat-set web press printed the inaugural Detroit Monthly magazine, 32 pages at a time. His 59 inch, Harris four-color, sheet-fed press printed the Michigan road maps. The variety of work included mailing services, perfect binding and color separations. T.A.S. served customers from start to finish – all in-house. His door was always open to any employee. He retired in 1991, at the age of 59. After selling T.A.S. Larry, always a proud, independent business owner, encouraged his children to pursue their own businesses and generously helped them to do so. After retirement, Larry and Bev began a new chapter of life. The couple loved to golf and they traveled the world with many wonderful friends. They became members of the Nomad travel group. Larry and Bev both became excellent golfers and won many awards. They were long-time members of the Island Country Club on Marco Island, the Walnut Creek Country Club in South Lyon, Michigan, and Shanty Creek Resort in Bellaire, Michigan. Larry was a fantastic snow skier. He and Bev enjoyed many ski trips with their children and group trips to the Rocky Mountains. Larry’s favorite ski resort was Snowmass, Colorado. He won many gold metals with Nastar races. Larry’s last years were spent at his home at The Arlington of Naples where the outstanding staff (too many to list) kept an eagle eye on him while he continued doing what he loved: walking, riding his bike, tending to his lanai full of plants and flowers while enjoying his Easy Listening music. He also had a constant source of support with his nurse, Susan Jones, and her staff Rhonda, Amiee and Debbie. Along with his private-duty nurses, Sidney, Sandy, Dave and Judy, these healthcare professionals were a kind and compassionate source of support for Larry and the family during his final months. A lifelong dog lover, he and Bev owned several English Springer Spaniels and two Shih Tzu’s. Larry loved Patty’s Shih Tzu, Wally, as well as his daughter Jill’s dog, Ivy, who was with him in his final days providing one of his favored forms of comfort. Larry said it best himself: “I worked hard and lived well. My life ended in perfection.” Survivors include two sons and three daughters: Jeffrey Angelosante and his wife, Diane Angelosante, of Commerce Township, Michigan; Karen Angelosante and her husband, Joe Davenport, of Santa Rosa Beach, Florida; Christopher Angelosante of Lansing, Michigan; Jill Djuric-Fisher and her husband, Glenn Fisher, of Johnsburg, Illinois; and Michele Angelosante-Peppo of Commerce Township, Michigan. He is also survived by his brother, Talentino Angelosante of Buda, Texas. He is the grandfather of 11; Rachel Grabowski, Amanda Peppo, Sophia Angelosante, Vincent Peppo, Colin Angelosante, Samuel Davenport, Dominic Angelosante, Elliott Djuric, Natalie Davenport, Michael Davenport and Grant Fisher. He is the great-grandfather of Theodora Davenport, Massimo Angelosante and Juniper Angelosante. In his honor, Larry’s children and Patty Gomez invite friends and family to join them at a funeral service and reception in Naples, Florida. Additionally, a Celebration of Life event will take place in Novi, Michigan. Funeral & Reception ~ Sunday, March 13th at 3pm ~ Naples, Florida Hodges Funeral Home at Naples Memorial Gardens, 525 11th Ave N, Naples, FL 34108 A Celebration of Life ~ Father's Day, Sunday, June 19th ~ Novi, Michigan O'Brien-Sullivan Funeral Home 41555 Grand River Ave. 9:00-10:00am – Coffee / pastries / greetings 10:00-11:00am – Eulogy - happy memories of a wonderful legacy and a life well lived 11:00-11:30am – Sharing of stories among the family and friends. Please RSVP to 248-408-8831 for this event so that the family can estimate attendance. In lieu of flowers, the family asks for donations to be made online to the Humane Society of Naples. (see link below)

Lirio Angelosante, a successful business owner, avid golfer, skier and storyteller known to friends as Larry, passed away March 6, 2022, at home in Naples, Florida. He was born in Ovindoli AQ, Italy, and came to the United States in June 1938... View Obituary & Service Information

The family of Lirio Angelosante created this Life Tributes page to make it easy to share your memories.