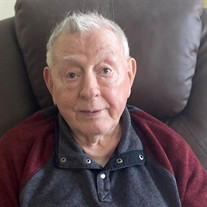 Larry L. LaFave, passed on Monday, January 17, 2022 in Grand Blanc at the age of 89. Beloved husband of the late Sophie for 45 years. Loving father of Patricia (Mark) McCormick, Margaret (the late Charles) Durga, and Edward (Stacey) LaFave. Dear papa of Mark, Michelle, Matthew, MacKenzie (Chelsea), Morgen, Mason, Myles, Simon, and great papa of Ruby, Amos. Brother of William (Eileen) LaFave, Therese (the late Lloyd) Ternes, and Mary (the late Robert) English. Brother-In-Law of Rose LaFave, and Ann LaFave, and the late Kenneth (Linda) Wells, David Wells and Donald Wells. Larry is also survived by many nieces/nephews, and great nieces/nephews. He is also preceded in death by his parents Joseph and May LaFave, siblings; Melvin (Laura) LaFave, Phillip D. (Barbara) LaFave, Ralph LaFave, Donald (Toni) LaFave, Tom LaFave, Charles (Bettie) LaFave, Doris LaFave, Paul LaFave, Robert (Suzanne) LaFave, and Catherine LaFave. Larry was one of fourteen children. As a young boy, he was a paperboy with his own route which he spoke fondly of. His father was a carpenter by trade and had instilled in his boys the importance of good work ethics and an honest hard day's work. Larry graduated from St. Mary's Catholic High School. He was sent to Germany for two years during the Korean War. Upon returning to civilian life he was employed by Kelsey-Hayes as a supervisor and retired after 32 years. He enjoyed photography and had a love of cars and bird watching. He was a softball coach for his daughter's team for several years. He also played hockey and was an avid bowler! Larry like most people in Michigan, had a love-hate relationship with the Detroit Tigers and Lions! We took great joy in watching him during the games! Larry met the love of his life, Sophie Wells and were married in 1959. At the beginning of their married life they were foster parents to several children before starting their family. They moved from the city of Redford to Novi to enjoy the country life in 1969 where they raised their family and a small farm of animals including horses, dogs and cats and an occasional visit from a herd of goats! They moved to Kalkaska after raising their family until the untimely death of his beloved Sophie. They enjoyed the beauty and stillness up-north along with traveling in their RV and had many adventures as a couple and with their grandchildren! He remained up-north for a short period of time before moving back to Novi. At the time of his death he had been a resident of Linden. Larry was a quiet spirited soul and was committed to the teachings of his faith and did just as Jesus taught and was a very generous man who would give you his last dollar or whatever it was you were in need of without hesitation or question. Nothing brought Larry more joy than the little grand and great grand babies! His smile could light up a room and he could sit and rock or play for hours! He will be dearly missed and has left a huge void in the lives of his family. We love and miss you so much already dad. Thank you for being a man of integrity and love. Rest in peace and fly high! Visitation at the O'Brien/Sullivan Funeral Home, 41555 Grand River Avenue, Novi, 248-348-1800 on Friday, January 21, 2022 from 3:30 PM to 7:30 PM. Instate Saturday, January 22, 2022 at Holy Family Catholic Church, 24505 Meadowbrook Road, Novi from 10:30 AM until time of funeral liturgy 11:00 AM. Interment will take place at Holy Sepulchre Cemetery, Southfield. To view the funeral liturgy live please Click Here Memorial donations may be made to Clara's Hope

The family of Larry L. LaFave created this Life Tributes page to make it easy to share your memories.

Send flowers to the LaFave family.