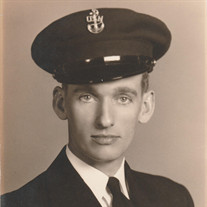 Keith Ansel Metcalf, age 99, passed away on Aug. 22, 2019. He is survived by Celia, his beloved wife of 77 years; three sons (Greg, Brad and Mark) and a daughter (Christine). As Grandfather to 7, Great Grandpa to 6, and Great-great Grandpa to 3, he set a good example, telling the kids, "You can be whatever you want to be, as long as it's honest." He volunteered for the Navy at the start of WWII, rising in 4 years to the rank of Chief Gunners Mate on the destroyer USS Twining DD540. Not knowing what greeting they might receive, they were all at battle stations when Twining was the second ship into Tokyo Bay at the conclusion of the war in the Pacific. He would not think of himself as a 'member of the Greatest Generation' but he was. Though trained in Accounting at Walsh College, his career was in Real Estate. Though he did well as an agent for home sales, he also pioneered condominium sales in Michigan and developed two early subdivisions in Novi. He greatly enjoyed (American) football and genealogy. He collected Currier and Ives prints, toy banks and netsuke (small Japanese carved ornaments). In the 1960s, he and Celia would make grilled cheese sandwiches and chocolate shakes for the family followed by popcorn while watching Disney on Sunday night - good memories. Even during his last few years, he was patient and uncomplaining. He had worked hard and sacrificed much to give his kids a better life. He always tried to do what was right. A memorial service will be held on Saturday, September 14th, at the O'Brien-Sullivan Funeral Home, 41555 Grand River, Novi, MI 48375. Visitation will start at 10 AM, Memorial at 11AM.

Keith Ansel Metcalf, age 99, passed away on Aug. 22, 2019. He is survived by Celia, his beloved wife of 77 years; three sons (Greg, Brad and Mark) and a daughter (Christine). As Grandfather to 7, Great Grandpa to 6, and Great-great Grandpa... View Obituary & Service Information

The family of Keith A. Metcalf created this Life Tributes page to make it easy to share your memories.

Send flowers to the Metcalf family.