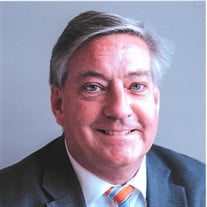 Keith William Hepp, passed Thursday, July 16, 2020 in West Chester, Ohio at the age of 55. He is survived by his children, Meghan, Emi, and Andrew, parents, Gerald (Gloria) Hepp, siblings, Colleen (Shaun) Horan, Brian Hepp, Denise (Mark) Laudenslayer, Christopher (Johanne) Hepp, and William (Candy) Hepp. Instate Saturday, July 25, 2020 at Holy Family Catholic Church, 24505 Meadowbrook Road, Novi from 10:30 AM until time of funeral liturgy 11:00 AM. This is a story about Keith Hepp. His first job was with a CPA firm, Plante & Moran, located in Southfield Michigan. He worked for the firm in the early 80’s. At the time he was a high school student. He was hired to do odd jobs, including shredding paper. That was how he got his reputation as someone who almost burned down the firm’s office. Back in those days, computers produced large volumes of fan-fold reports. It was a significant chore to shred all those reports. Keith was a very gregarious individual who would rather tell jokes than perform menial jobs. So, he devised an automated system for shredding the paper. He simply fed the top sheet of a fan-fold pile into the shredder and let the shredder pull the paper into the machine. This freed up Keith so he could go talk to someone. Unfortunately, the machine heated up and started a fire in the paper. (He didn’t get fired but he did earn the mentioned reputation.) When Keith finished high school, he went to Xavier University in Cincinnati. He earned his bachelor’s degree and passed the CPA exam. He went to work for Arthur Anderson, a CPA firm, in Cincinnati for a couple of years. Keith experienced a partner getting fired when the firm lost a client and he decided his fortunes would be better elsewhere. As typically happened throughout his life, while there Keith developed some lifelong friends. Keith’s next employment was at Cincinnati Bell. While he was doing well, he felt he could do better by starting his own consulting business. One of his clients, Healthbridge, convinced him to set aside his consulting operations and to work for them full time. Healthbridge is a non-profit entity in the medical records industry. He worked up to the position of CFO and was responsible for negotiating multi-million-dollar contracts with the federal government and others. He served on the board of many organizations, including serving as chairman of a national board in the medical records industry. As too often happen in success stories, Keith died on July 16. He unfortunately contracted legionnaire disease. We are very sorry to have lost him. We have received many requests for something that will create a memorial tribute for his life. We therefore have joyfully created the Keith Hepp Scholarship Fund at Xavier University in Cincinnati. If you are interested in contributing, please mail a check to: Xavier University 1507 Dana Ave. Cincinnati, OH 45207 In the memo line please write “Keith Hepp Scholarship Fund”

The family of Keith William Hepp created this Life Tributes page to make it easy to share your memories.

Send flowers to the Hepp family.