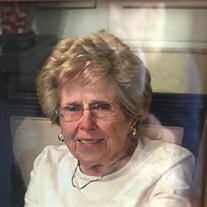 Kathryn A Erickson Kathryn “Kay” Erickson, née Kilcoyne, passed away peacefully Sunday morning, December 19, 2021, following an extended convalescence in Plainfield, IL. Kathryn was born in Detroit, MI on September 16, 1926, to Frank Roger Kilcoyne and Kathryn Clementine Kilcoyne (Rice). She was the fourth of five children in her family, her birth order serving as a likely contributor to her strong will and talent for speaking her mind. Kathryn attended grade school at St. Ambrose near Detroit and earned her bachelor’s at The University of Detroit. An avid learner, she earned her postgraduate degree in teaching at Wayne State University and spent many years substituting in the Detroit Public School System. Kathryn married Carl R Erickson in 1951 at St. Ambrose in a ceremony officiated by her brother, Father Bob. The couple raised their three children initially in Detroit and later, Farmington Hills, MI. Upon retirement, they moved to Novi, MI, wintering in South Pasadena, FL. Kathryn and Carl were married for 56 years until his death in April of 2008. Affection, humor, and consideration defined their steadfast and remarkably unalterable union. Kay loved to swim, golf, and play tennis, and was a regular in her bridge group. She was an attentive listener and insightful adviser – her conversation often punctuated by her terrific and distinct laugh. Kay was a woman who knew herself, prioritized the needs of others, and lifted the spirits of a room simply by entering it. Kathryn was preceded in death by her loving siblings, Frank Roger II, Fr Robert Joseph, Mary Jane (O’Neill), and John Martin. She is survived by her adoring children, Patricia King (Charles), Thomas, and Barbara Whall (Timothy), her dear sisters-in-law, Gloria Weber, and Lorraine Kilcoyne, her four admiring granddaughters, her five great-grandchildren, and her many nieces and nephews. Visitation will be Tuesday, December 28th from 3-7pm at O’Brien-Sullivan Funeral Home, and a Mass for Kathryn will be held at St. James on Wednesday, December 29th at 10:30am. Kathryn was a devoted wife, mother, sister, grandmother, great-grandmother, teacher, and friend. She is greatly missed by all who had the unique privilege of knowing her.

The family of Kathryn Anne Erickson created this Life Tributes page to make it easy to share your memories.

Send flowers to the Erickson family.