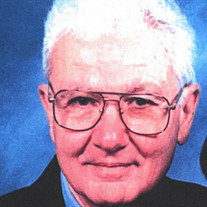 When you give love, you get love. The kindness, compassion, thoughtfulness and respect Joe Rinaldi showed for everyone reflected back on him from all those that knew him. Family meant the world to him. He was a loving husband, father, grandfather and great grandfather. He had an incredible ability to listen and be present in every conversation. He made you feel that what you said mattered and, more importantly, that everyone mattered to him. He was caring, principled and intelligent. He radiated honesty. He was resilient. He was a survivor. Joe Rinaldi was a patriot, earning 3 battle stars. Born in Naro, Italy on February 22, 1922, he enlisted in the US Army in 1942 as an enemy alien at the age of 20. He became an American citizen in Algiers, North Africa. He served in US Army Military Intelligence during World War II interrogating prisoners and questioning civilians for counter intelligence and espionage until the end of the war. Joe Rinaldi enriched our lives in so many ways. It was a blessing he was with us for so long. Now, he will live with God forever. And, he will be treasured forever in the hearts of all that knew him. Joseph A. Rinaldi (Joe) was born to the late Carmelo and Giovanna Rinaldi. Beloved husband of Angelica for 70 years. Loving father of Steve (Kim), Joanne (Bill) Olsen, Bob (Kathy) and Lisa (Dave) Drews. Grandfather of six and Step-Grandfather of two: Christopher Olsen, Jonathan Olsen, Jennifer Olsen, Joseph Drews, Ryan Drews, Joshua Drews, Stephanie Carroll and Michelle Monticello. Great-Grandfather of three: William, Adam and Nathan. Proceeded in death by his brother Orlando. He was a CPA with a Bachelors Degree in Accounting. Joe worked for Ford Motor Company for 30 years. He was an avid reader and bridge player. Visitation will be at St. James Catholic Church, 46325 W. Ten Mile Rd., Novi on Friday, July 26, 2019 at 10:00am with funeral liturgy at 10:30am. Donations may be made to wounded warriors projectclick here to donate

When you give love, you get love. The kindness, compassion, thoughtfulness and respect Joe Rinaldi showed for everyone reflected back on him from all those that knew him. Family meant the world to him. He was a loving husband, father, grandfather... View Obituary & Service Information

The family of Joseph Rinaldi created this Life Tributes page to make it easy to share your memories.

When you give love, you get love. The kindness, compassion, thoughtfulness...

Send flowers to the Rinaldi family.