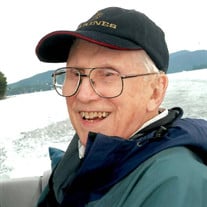 John William Kerastas was born in Detroit, Michigan on May 22, 1924. He was the son of first-generation immigrants from Greece and England. As a child he was energetic, athletic, and enterprising. At the age of 12, he began working as a paperboy and was already placing his earnings in a savings account. In high school, he competed on the swimming and diving team. He enlisted in the U.S. Army’s Air Force after graduation. Before deploying to the Pacific, he was specially trained as a weather forecaster at UC Berkeley. During his 3 years of service, he was stationed in New Guinea, Australia, and the Philippines. He persevered through malaria, tumultuous plane rides, hurricanes, intense sea sickness, sharks, and an ill-conceived wild boar hunt. After the war, John attended Wayne State University. There he met Vera Rose Zuzich, whom he married in 1948 without ever dating another woman. Together the couple had 3 children - John, Nancy, and Eric – to whom he passed down practical skills through frequent “golden moments.” In 1962 John and Vera moved from Detroit to Farmington Hills, where they lived out the rest of their lives. John worked at the Ford Motor Company for 36 years, during which he was awarded 3 new cars for his ingenuity in improving manufacturing processes. John was an outdoorsman who enjoyed long fishing and hiking trips with family and friends. He and Vera traveled the world extensively. His many hobbies also included photography, traveling, puzzles, and genealogy. Before the latter became popular, he researched and published a book on his family history. Throughout his life, he remained an adventurer and learner, diving into technology and enjoying academic lectures. He was a realist who instilled in his children the importance of preparation and moderation. He was also an optimist who knew how to savor life’s little pleasures. He is survived by his brother Paul, three children, and six grandchildren. His funeral service will be held Saturday January 22nd at O’Brien-Sullivan Funeral Home in Novi at 1pm. Open visitation starts at 11am. Memorial contributions may be directed to Wounded Warrior Projectclick here to contribute or Heifer International click here to contribute To watch the funeral service for John please click the link below and enter in passcode and meeting ID. Join Zoom Meeting https://us02web.zoom.us/j/89667730077?pwd=R2M3anpkR1FBU2dRd3R0Zk15dVQzZz09 Passcode: 125981 Meeting ID: 896 6773 0077

John William Kerastas was born in Detroit, Michigan on May 22, 1924. He was the son of first-generation immigrants from Greece and England. As a child he was energetic, athletic, and enterprising. At the age of 12, he began working as a paperboy... View Obituary & Service Information

The family of John William Kerastas created this Life Tributes page to make it easy to share your memories.

John William Kerastas was born in Detroit, Michigan on May 22,...

Send flowers to the Kerastas family.