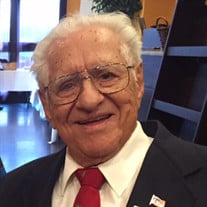 Cassella, John N. Age 97 formerly of Novi and resident of Naples, FL passed away on October 23, 2020. John was born on October 28, 1922 in Hamden, CT to the late John F and Angelina (Franco) Cassella. He married the love of his life Florence Ryder on October 20, 1945 in West Haven, Ct. He and Florence raised five children and they spent 70 + years together before she preceded him in death (2016). He will be missed by his family including son John F. Cassella, Judy(Joe) Kaplan, Robert Cassella and the late Thomas and Carol Cassella. Grandfather of Curtis Foreman(Rhonda),Derek Foreman(Vonne), Kellie Loughran(Brendan), Courtney Bizzis (Ryan)and Brittany Kaplan. Great Grandfather of Natalie Foreman(Dan), Travis and Aubrey Foreman. Brother of the late Phyllis Fitzmartin and the late Lillian Cassella. John graduated from West Haven High school in 1941 where he played varsity sports: baseball, Basketball and captain of the soccer team. He enlisted in the Navy in 1943 during WWII. He served on the U.S.S. Marblehead for 1 year and was appointed to the Navy V-12 ROTC Program at Yale University. John graduated from Yale in 1947. After WWII, John began a career in the construction building materials with Tremco a subsidiary of B.F. Goodrich. Marketing manager of roofing in 1974. He received a U.S. Patent for detecting moisture in roof insulation. Today it is the standard used by roofing inspectors. John was a life member of the BPOE (Elks) in Naples, FL and MI, U.S. Naval memorial and actions in U.S.S. Marblehead Reunion and class reunion. John and Florence loved spending time with family and friends in MI, CT and FL. He loved to discuss politics, sports, enjoyed golfing and dancing. He was a passionate and caring man. He touched the lives of many people in business and was grateful for the love that surrounded him. Memorial contributions may be directed to Juvenile Diabetes Foundationclick here to contribute Funeral Liturgy was held at Prince of Peace Catholic Church, West Bloomfield, MI. Interment at Holy Sepulchre Cemetery, Southfield, MI. Expressions of sympathy www.obriensullivanfuneralhome.com

Cassella, John N. Age 97 formerly of Novi and resident of Naples, FL passed away on October 23, 2020. John was born on October 28, 1922 in Hamden, CT to the late John F and Angelina (Franco) Cassella. He married the love of his life Florence... View Obituary & Service Information

The family of John N. Cassella created this Life Tributes page to make it easy to share your memories.

Send flowers to the Cassella family.