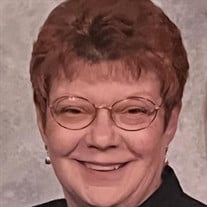 JoAnne C. Tappan born May 18th, 1941 died April 21, 2022. Preceded in death by her parents Joseph and Ethel Antkowiak (Tuchelski), brother Leonard Antkowiak. Children Kelly A. Daroczy (Tappan), Keith A. Tappan Jr. and Kevin J. Tappan. Survived by former spouse Keith A. Tappan, Son-in-law, Gary J. Daroczy Sr. Grandchildren, Gary (Sarah) J. Daroczy, Karie (Ryan) A. Turner (Daroczy), Ross J. Tappan, Leah M. Tappan, and Ava C. Tappan. Great grandmother of Tyler M. Daroczy and Nathan J. Daroczy. Also survived by many nieces, nephews, great nieces and nephews, and great-great nieces and nephews and friends. JoAnne’s love of life did not come to and end with her death. JoAnne passed away on April 21st, 2022, at the age of 80 after a prolonged battle with multiple health conditions, in the presence of loved ones who will continue to honor her legacy by living their lives to the fullest. In high school, Joanne was a part of the choir, earning many awards for her beautiful high soprano singing voice. Joanne graduated high school from Cooley High in 1959 and from there married her former spouse Keith Tappan on October 15th, 1960. JoAnne was dedicated to her family and was involved in all school events for her 3 children. She was an active member of the neighborhood and was a perfect example of the phrase “it takes a village” with all the children on her street. In 1982 she started work for American Community as a secretary and was then promoted to fleet manager. She took much pride in her work until she retired in 2005. When her youngest son Kevin passed away in 1989, she became involved in Compassionate Friends through Ward Presbyterian Church of Northville where she gained lifelong friends with other women who had lost a child. Later that year her first grandchild, Gary Jr. was born. She had said that he helped her through one of the darkest times of her life. JoAnne was highly creative and worked with her hands. She crocheted hundreds of blankets over the years which she donated to Angela Hospice and taught her eldest granddaughter to crochet as well. For every child, grandchild, and great grandchild, she crocheted a baby blanket, and made blankets as wedding gifts. When her daughter and niece were recovering from surgeries related to their breast cancer diagnosis, she made heart shaped pillows to rest under their arms. She sewed patches on her granddaughter’s girl scout vests and sewed multiple costumes for her grandchildren. She was always involved in her grandchildren’s lives. She never missed a football game, dance recital, baseball game, basketball game, or choir concert. Every birthday, baptism, and first communion, she was present. One thing JoAnne was admired for was her traditions. Christmas Eve family parties, block parties, and birthdays to name a few. Her favorite hobby was gardening. She grew everything from cucumbers, peppers, squash, lettuce, herbs, corn, and tomatoes. The thing she collected the most of were cardinals. She believed that they were loved ones who had passed that were coming to visit her. The most wonderful thing about JoAnne was her heart for others. She always put the needs of others before her own and never thought twice about helping someone who needed it. She was never afraid to give someone advice, and always offered a shoulder to cry on, though her matter-of-fact personality would not allow someone to wallow for too long. She will be remembered for many things and will live on in the hearts of those who loved her. JoAnne’s visitation will be April 27th 2022 from 12-2 and Memorial service will be held at 2:00pm at the O’Brien/Sullivan Funeral Home 41555 Grand River Novi. Inurnment will be at a later date at Glen Eden Memorial Cemetery, Livonia. Memorial contributions may be directed to Angela Hospice. www.angelahospice.org To send flowers or a memorial gift to the family of JoAnne C Tappan please visit our Sympathy Store

The family of JoAnne C Tappan created this Life Tributes page to make it easy to share your memories.

Send flowers to the Tappan family.