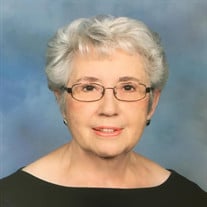 Joan Therese Conway Lee, 87, died peacefully on April 7, 2020 in Novi, Michigan, of complications from dementia. She was born March 24, 1933 in Detroit, Michigan, the daughter of Marie Oberle Conway and Harold Conway. Joan was predeceased by all six of her siblings: Joseph, Robert, Thomas, twins Mary and Ann, and her twin John. Joan was the beloved wife of the late Marion Edgar Lee, whom she married on May 8, 1954. Marion died on June 28, 2004, shortly after their 50th wedding anniversary.She was the dear mother of Paula Lee, Danette (Ken Crawford) Lee, Donald (Karen) Lee, Rebecca (Andrew) Portnoy, David (Carolyn) Lee, Laura Lee, and Jennifer (Jonathan Gomes) Lee. She was a loving grandmother to Megan, Alex, Nathaniel, Elijah, Tess, Melissa, Matthew, Emma, Evan, Helen, Erin, CJ, Alaysia, Aliya, Ethan, and Allie, and great grandmother to Liam, all of whom survive her.Having nearly finished the prodigious work of raising her 7 children, including managing the family’s budgeting and finances, Joan moved to the paid workforce in the mid-1980s. Her attention to detail, discretion, organizational skills, and writing ability led to a successful career as a legal secretary and, later, as an executive assistant to the director of Boysville of Michigan (now called Holy Cross Services). In retirement, she led a number of initiatives for the Fox Run Catholic Council, and served as editor of the Council’s newsletter. In this work, she developed meaningful professional and personal relationships. In particular, Joan treasured her friendship with Ed Niemiec, sharing their faith, their love of movies, and attending Mass together often.Joan lived by her deep and abiding Catholic faith and special devotion to St. Therese of Lisieux. Quick with a pun and a snippet of song (from classic musicals to ad jingles), Joan laughed often and brought laughter to those around her. She was known for her baking. In retirement, she developed a love for travel and for slot machines.A Memorial Mass and celebration of Joan’s life will be held at a later date. Interment will be in Sacred Heart Cemetery in Roseville, MI. Donations in memory of Joan can be made to Holy Cross Services’ foster care & children’s services fund. Info here: https://holycrossservices.org/how-can-you-help/online-donations/.

Joan Therese Conway Lee, 87, died peacefully on April 7, 2020 in Novi, Michigan, of complications from dementia. She was born March 24, 1933 in Detroit, Michigan, the daughter of Marie Oberle Conway and Harold Conway. Joan was predeceased by... View Obituary & Service Information

The family of Joan Therese Conway Lee created this Life Tributes page to make it easy to share your memories.

Send flowers to the Lee family.