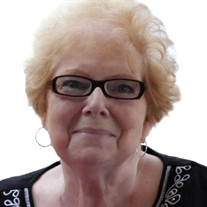 Kalosky, Jeannette Marie May 10, 2020 Age 78. Loving mother of David (Lori), Daniel (Lorie), Kevin (Masha), Carolyn, Gary (Joan), and Keith. Dear grandmother, “Mooma” to some, of Jillian (Jim), Caitlin (Kevin), Sterling, Brendan, Gabrielle, Vanessa, Halle, Morgan, Anastasia, and Cheyenne. She lived for her grandchildren, and would do anything for them. Sister of Robert (Margaret), James (Judith), Marilyn, and sister-in-law of Judy. Jeannette is also survived by many nieces, nephews, and raised Jeff (Kellie and son John), and Val (John and daughters Lauren, Catherine) after her sister Shirley died. Jeannette was predeceased by her parents: Harvey Burke and Edna (Bartz) Burke, brother Harvey, sister Shirley, great nephew Dylan, Boyfriend Art Yarmak, ex-husband David Kalosky. Her six kids were her life, her family was everything to her. Once they were old enough, she went to work at Crowley's in Farmington Hills selling men's suits and then at Jacobson's at Laurel Park. Jeanette raised her children in the Bel-Aire subdivision in Farmington. She was kind and compassionate to everyone she met, she touched many lives and many people wanted to be her friend. She was an avid Tigers fan and took her kids to Tiger Stadium on many occasions. She played golf when she was still physically capable but then resigned to watch it on TV every weekend. She loved listening to Willie Nelson, Pavarotti, Motown, Bob Seger, Neil Diamond, and Rod Stewart, so she was cool. Her brother Jim, thought she had the most beautiful smile and would just like to hear her say one more time, "shut up, Jimmy!" A Celebration of Life will be held 12:30 pm Sunday July 11, 2021 at the O'Brien/Sullivan Funeral Home 41555 Grand River Ave., Novi, MI 48375 with visitation from 11 am until time of service. Memorial contributions may be directed to National Multiple Sclerosis Society www.nationalmssociety.org

The family of Jeanette Kalosky created this Life Tributes page to make it easy to share your memories.

Send flowers to the Kalosky family.